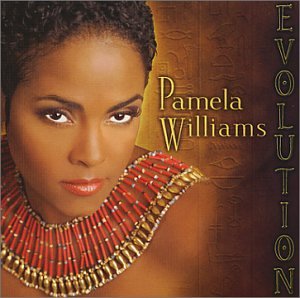 The smooth, stylish, sophisticated, meticulously polished, refined and highly produced sounds of that jazzy pop music called smooth jazz are very evident in the newest CD release Evolution by Pamela Williams. As a multi-saxophonist, flautist and vocalist, Williams’ playing is very much in the same vein as that of David Sanborn, Candy Dulfer, Richard Elliot, Boney James and other instrumentalists heavily influenced by the sounds of contemporary R and B, Funk, and Soul.

Of the fifteen tunes on Evolution, ten are originals penned in whole or at least in part by Williams. Her music is largely a polyrhythmic pastiche of sound in a complex musical texture of programmed and synthesized sounds backing her saxophone, flute or voice. While Williams demonstrates adequate chops as an instrumentalist and improviser, there is nothing particularly aggressive about her music making, or anything that is particularly artistically challenging to the listener’s ear. From an extremely broad perspective one may have difficulty discerning much in the way of musical variety on Evolution. Many of the tunes on the CD are very similar in terms of tempi and general overall sound. Williams’ music is like one long, smooth, soft, pleasurable aural caress, albeit with a definitive rhythmic groove. What musical variety that exists is achieved primarily from which lead instrument Williams chooses (soprano, alto or tenor saxophone, flute or voice) and other alterations in accompaniment formulae.

If the listener is seeking profoundly deep artistic statements, or new innovative sounds or cutting edge ways of playing within the stylistic penumbra of jazz, Evolution may be disappointing. If what one desires however, is familiar, smooth, sexy, seductive music that envelopes the listener in a pleasant aural soundscape, then Pamela Williams’ newest recording will be a most welcome addition.

Lifetime; A Song For Pam; Placero; Evolution; Queen Of The Nile' The Dance; I Am Love; Smooth; Thinking About You; Cleopatra's Destiny' Poison; At The Concert; Vibrations 5ive Minutes; Lifeline (Pamela's Pulse) (Total Time: 68.54).

Pamela Williams: Alto And Soprano Saxophones; And A Host Of Thousands.