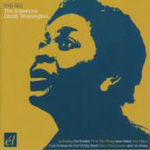 In these days of photogenic warblers putting out the standards with only a negligible grasp of individuality and little in the way of interpretive skill, Dinah Washington continues to put a smile on your face before she's even got through the first line of a song. Evil Gal is a trawl through the sides she cut in the first half of the 1950s, and there isn't a song here that finds her in less than sublime form. It might almost be said that Washington was the other side of a coin to Billie Holiday, but on "Am I Blue?" she proves she was able to convey a very different but no less affecting brand of melancholy.

She could also put over a glorious effervescence, as evidenced on "TV Is The Thing," a song so lacking in substance that countless singers could have made nothing of it. On "I Let A Song Go Out Of My Heart," Washington is backed by a small group including trumpeter Clark Terry and pianist Junior Mance, and their combined efforts highlight just how many different shades of sassy Washington was capable of delivering. The result is singing for people who don't usually enjoy singers—and as such it's no mean achievement.

Washington's reading of "I've Got You Under My Skin," perhaps unsurprisingly, has nothing at all in common with Frank Sinatra's; she brings to the lyric a very different reading, all muted joy, especially in the closing section, following some fireworks from a trumpet section made up of Clifford Brown, Terry and Maynard Ferguson.

In short, this is a "listen and learn" collection for singers who feel obliged to be informed about the field they're working in. It's also strong enough to overcome the aversions of those for whom the human voice can often be nothing more than an intrusion. Enough said.

Fat Daddy; Go Pretty Daddy; TV Is The Thing; Feel Like I Wanna Cry; Lean Baby; Never Never; I Ain't Going To Cry No More; Am I Blue?; My Man's An Undertaker; Short John; Our Love Is Here To Stay; One Arabian Night; I Let A Song Go Out Of My Heart; A Foggy Day; No No No (You Can't Love Two); What A Great Sensation; If It's The Last Thing I Do; I've Got You Under My Skin; Darn That Dream; Blue Gardenia; I Diddle; Wasn't It?