By John Kelman
September 2, 2004
Sign in to view read count 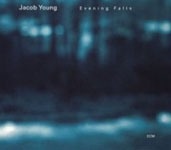 While guitarist Jacob Young has been on the Norwegian circuit for ten years, releasing three albums under his own name as well as a beautiful duet record with singer Karin Krog, Evening Falls is his first to receive widespread exposure. And that's a good thing as Young, in those ten years, has developed, much like piano counterpart Tord Gustavsen, into a singular artist who manages to blend a more ethnic Scandinavian approach with a clear respect for the American tradition. But whereas Gustavsen's sound owes much to New Orleans and the gospel tradition, Young comes from the more subdued and restrained approach of Jim Hall, with whom which he studied at New York's New School for Jazz and Contemporary Music.

Young manages to blend an understanding of playing changes with an almost naive folk song-like simplicity. "Blue," which opens the album, is based around a simple chorus that sounds how Pat Metheny might have, had he grown up in Norway instead of the American Midwest. Young's choice of acoustic guitar for this and nearly half the programme of nine originals, lends to the ethnic leaning of the record, although his harmonic choices are often blended with more advanced harmonic ideas. And his solos, whether on acoustic or electric, are clearly informed by ideas he developed in study with artists including John Abercrombie, Richie Beirach and Kenny Werner. His playing is defined by a strong lyricism and understanding of the importance of space, two characteristics that are common denominators with all his educators. But by melding these qualities with a certain Norwegian roots element, he has created a sound that, again like Gustavsen, sounds refreshingly new while, at the same time, oddly familiar.

Evening Falls is also notable as the first ECM recording featuring drummer Jon Christensen since the '99 sessions that resulted in Bobo Stenson's Serenity . While Young's approach is less free, motivating Christensen to work more within a defined yet still elastic rhythmic framework, his playing is as subtle as ever. His playing on the rubato tone poem "Minor Peace" is filled with implication, but never resolves into the obvious.

The other members of Young's quintet, which has been together for two years, are bass clarinetist Vidar Johansen, trumpeter Mathias Eick, whose melancholy melodicism harkens to Kenny Wheeler while displaying a charming simplicity, and bassist Mats Eilertsen, known to ECM fans as the bassist for saxophonist Iain Ballamy's Anglo-Norwegian free group, Food. Johansen shines, even as his style places him more in a support role, through the intuitive counterpoint he provides to both Young's and Eick's more overt explorations. Eilertsen proves himself to be a strong player with a tender side that he examines on the subtle tango rhythm of "Sky."

Like Gustavsen's Changing Places , Evening Falls heralds the international arrival of an artist who, with a number of years behind him, has already developed a mature and personal approach. As a player, composer and bandleader he will clearly be someone to watch.