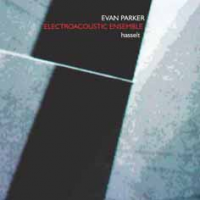 Although Evan Parker Electro-Acoustic Ensemble had recorded five albums for ECM since 1997, in 2009 saxophonist Parker's Psi label released SET under his own name; the album was effectively by the Electro-Acoustic Ensemble, sharing its personnel, instrumentation and working methods. At the time, it seemed as if it might have been released under Parker's name for contractual reasons. Now, with the release of Hasselt, the plot thickens; it is credited to Evan Parker Electroacoustic Ensemble (note the—significant?—absence of the hyphen and the capital A) and the personnel includes founder members Barry Guy (double bass), Paul Lytton (percussion, live electronics), Walter Prati (live electronics, computer processing) and Marco Vecchi (sound processing, sound projection) alongside such well-established members as Lawrence Casserley (signal processing instrument, percussion, voice), Agusti Fernandez (piano, prepared piano), Joel Ryan (sample and signal processing) and Furt (electronics).

Throughout its existence, the ensemble has continued to add new members; having started in 1990 as a sextet, at the last count they numbered close to twenty. Hasselt includes Ishikawa Ko on sho plus the Americans trumpeter Peter Evans and clarinetist Ned Rothenberg, all three of whom debuted on The Moment's Energy (ECM, 2009) while Dutch clarinetist Peter van Bergen makes his debut here (substituting for founder member violinist Philipp Wachsmann who was unavailable). So, within this version of the ensemble, there are eight instrumentalists and seven electronics players or processors, with Paul Lytton having a foot in each camp. That ratio ensures that the ensemble achieves its trademark symbiosis between real instruments and electronics, blurring the boundary between the two with neither dominating.

The music was recorded in concert in Hasselt, Belgium, over two consecutive nights in May 2010, at the end of a European tour. In some cities on that tour, the ensemble played two nights with the first designated as "Evan Parker Electro-Acoustic Ensemble Break-Ups" and the second as the full ensemble. On the former, small sub-groups (of three to five members) from the ensemble improvised together with nothing pre-determined but the performers, recalling the widely-imitated methodology of Company. Of the four tracks on Hasselt, three are small groups while the fourth—from the second night—features an improvisation by the entire ensemble.

As with Company, the small groups throw together combinations of instruments and sounds that are fresh and stimulating. They all employ some electronics but, compared to the full ensemble, the balance leans more towards the instruments. So "Hasselt 1" brings together sho and piano plus live electronics and computer processing from Prati in a delicately beautiful piece, while the contrasting "Hasselt 2" combines double bass and clarinet with live electronics by FURT. On "Hasselt 3," Lytton is the sole electronicist in a quintet alongside trumpet, sho, clarinet and piano, and his use of electronics is noticeably more economical than Prati's or FURT's, meaning that, of any here, the piece comes closest to straight ahead instrumental improv. The use of three different electronics players in the three small groups provides a useful and interesting opportunity to compare their styles outside of the large ensemble.

By the start of "Hasselt 4" by the full ensemble, the album has already provided over 38 minutes of satisfying music, so that track feels like a bonus. Yet, remarkably, until it begins, we have not heard a note from Parker himself. That is soon remedied as his soprano saxophone is central to the ensemble, both heard directly and via the sampling and processing of the electronicists. While the ensemble's first two albums were studio-recorded, ever since the use of samples, live electronics and sound processing in their music has blurred the boundary between studio-recording and live performance. That is true of all four pieces here, irrespective of the group size or personnel, but most noticeably in "Hasselt 4" where so much processing takes place that it becomes impossible to tell the original from its image from the image of its image and so on. But, that blurring is the joy of this ensemble, both live and on disc, as it creates a shimmering kaleidoscopic effect that is as mesmerising here as ever.

Hasselt is a valuable addition to the discography of Evan Parker Electro-Acoustic Ensemble, complementing and expanding upon its earlier recordings. It is to be hoped that its continued expansion and experimentation will be further documented, either by ECM or by Psi.