By Bruce Lindsay
February 18, 2014
Sign in to view read count 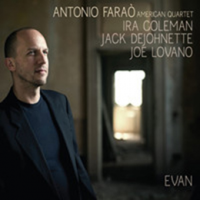 Pianist and composer Antonio Faraò has a wealth of experience in jazz, beginning as a youngster in his native Italy and developing through a career that extends over 30 years. Evan, dedicated to his young son, is Faraò's twelfth album as leader. The seven originals and two covers are credited to Antonio Faraò American Quartet. The band's title reflects the fact that the recording took place in the USA and gives an indication of Faraò's musical compatriots—bassist Ira Coleman, saxophonist Joe Lovano and drummer Jack DeJohnette.

It's Coleman who makes the first emphatic impression, with the tough, rolling, bass riff that underpins "Another Way." Coleman and Dejohnette are a constantly rewarding partnership, their confident rhythms providing an unerringly stylish foundation.

Faraò's contributions are just as stylish as Coleman and Dejohnette's—he seems to relish the freedom afforded by this talented and vastly experienced rhythm pairing. Alongside Coleman and Dejohnette his piano can get a little lost in the mix—although his phrasing and timing make it worth making the effort to listen. As a soloist he's much more up-front, taking control and playing with confidence. Faraò's solo on "Giant Steps" is superb—attacking with a flourish—but his loveliest performance is on "Per Caso." Lovano sits this one out, giving more space to Faraò and Coleman to craft their solos—space they both take full advantage of.

Lovano is probably the best-known of the quartet, but his contributions are less consistent than those of his colleagues. He adds endearingly joyful soprano to "Evan"—matching Judi Silvano's fragile wordless vocal—and similarly engaging tenor to "So Near." However, on the pretty "Roma Nun Fa La Stupida Stasera" and John Coltrane's classic "Giant Steps" he seems uncharacteristically detached. On "Riflessioni" Lovano, Coleman and Silvano seem to meld together into a single, repetitive, sound that forms a disappointing mid-point for the album.

"Tough" finds Lovano back on form—the tenor and piano interplay is terrific. "Two Faces" features another brisk, attacking, solo from Faraò, punchy and assertive bass and drums from Coleman and Dejohnette and Lovano's tight, positive tenor sax. It rounds off Evan on a high, showcasing Faraò's writing talent as well as the American Quartet's command of their instruments. A fitting close for the album.