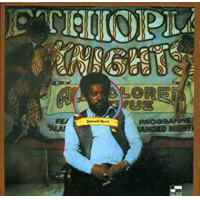 Donald Byrd (1932-2013) was a solid and dependable and prolifically recorded hard-bop trumpeter during the style's mid 1950s to mid 1960s heyday, though he was never an innovator, far less an auteur. He later went on to make a string of tedious disco-cum-jazz-funk albums which sold by the truckload.

On the cusp of this shift in trajectory, Byrd made a handful of unassailable groove-jazz classics. Ethiopian Knights is the best of them. Such is the enduring demand for the album that Blue Note has reissued it on vinyl eleven times. This summer 2019 edition is in the Blue Grooves strand of its Blue Note 80 Series.

Ethiopian Knights is bookended and made magical by two extended, loosely structured jams, the first clocking in just short of sixteen minutes, the second just short of eighteen. There is little between them, but the opener, "The Emperor," is the stand-out by a short neck. An on-the-one deep-strata groove is maintained throughout by electric bassist Wilton Felder, drummer Ed Greene and guitarist Greg Porée, over which William Henderson and Joe Sample funk it up on Fender Rhodes and organ. The horns are to die for, too—Byrd, nicely melismatic, is on top form alongside tenor saxophonist Harold Land and trombonist Thurman Green. Add Bobby Hutcherson on vibraphone and three, count 'em, electric guitarists and is it any surprise that "The Emperor" is a killer?

Well, yes, it is. Because Byrd went on to achieve far less with equally distinguished lineups in the years ahead. Ethiopian Knights cuts it because Byrd's recipe had yet to become a formula. It was fresh and fun and the musicians clearly had a ball making it.

Side One: The Emperor; Jamie. Side Two: The Little Rasti.