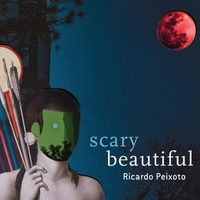 A well-known chocolate confection advertises itself as "Indescribably Delicious." That phrase also aptly describes guitarist/composer Ricardo Peixoto's album, Scary Beautiful. It is a recording of rainbow textures, infectious energies and utterly superior musicianship. And, it is one that encourages devouring.

Peixoto (pronounced pay-sho-to), Brazilian by birth and now residing in L.A., gives us his third—and best—recording to date as leader. As one might expect of a player from such a rich musical and cultural landscape, the effort is lush with vivid and exotic Brazilian (and other) rhythms, deeply probing melodies, marvelous orchestrations and much passion. It is a near-hour of pure aural joy.

The ten tracks—all Peixoto originals—are exotic in terms of their rhythmic, melodic and harmonic soundscapes. Yet each is approachable and seductive in appeal. For example, the opener, "Circles," is a dance-like up-tempo melody with Peixoto and soprano saxophonist Pete McCandless doubling, and each exploring inventively. The darker/lighter energetic "Santos e Demônios" is a brilliant "battle" where the arrangement and orchestration are perfection. The incorporation of strings with woodwinds and guitar is superb on "Scary Beautiful." "Nerieds," brief and beautiful, is a haunting, cinematic track in which voice, flute, cello and accordion spook. The contemporary upbeat samba, "Morro da Paixão" adds horns (and a terrific flugelhorn solo by Jessé Sadoc) in Luiz Brazil's sophisticated arrangement.

Throughout the session, Peixoto demonstrates that he has tremendous classical and jazz guitar chops and also that he's been influenced by the legendary Pat Metheny (a teacher/mentor of Peixoto's at Berklee). Peixoto's solos are invigorating, superbly configured, and mesh beautifully with the textures around and below him (e.g. "Morro da Paixão,"). There's plenty of restrained and exhibited passion in Peixoto's playing. He is no show-off, but he shows and knows beauty—for example, on the expressive duet with pianist Marcus Silva on "Simpática" and the beautiful yearning ballad "Pixinguinga," a tribute to two legendary Brazilian composers.

While respecting them, Peixoto steers clear of more familiar bossa nova grooves, the exception being "Velha Amizade," a terrific composition which warrants a lyric. This is classic, traditional Brazilian fare contemporized and performed with zest by outstanding musicians across the board.

Scary Beautiful is an escape to an enchanted place where the mind can expand and embrace musical visions. It is a superior effort, as sweet as they come. And, as they say in Brazil, "Indescritivalmente deliciosio!"