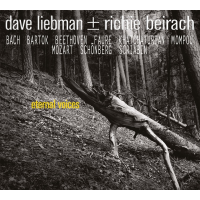 Dave Liebman and Richie Beirach have known each other for half a century and this double album is a celebration of their friendship. They've recorded together during this period in varying configurations. There was Liebman's short-lived but highly praised jazz rock group Lookout Farm formed in 1974 and from the 1980s there was Quest. But arguably it's their duet albums that have resulted in the most intriguing and musically timeless statements. There have been quite a few, too, beginning with Omerta (Trio/Storyville, 1978) and succeeded by Double Edge (Storyville, 1985), Chant (CMP, 1990), The Duo Live (Advance, 1991), Unspoken (Outnote, 2011) and most recently, a collection of ballads appropriately entitled Balladscapes (Intuition, 2016).

Recorded in December 2016 and August 2017, this collection of mainly classical pieces might be misinterpreted as "merely" chamber jazz, but that would sell the record far short of its actual achievement. Liebman is a consummate improviser, and for a reedsman who cut his teeth with Elvin Jones and later with Miles Davis in one of the maestro's most adventurous phases, this is hardly surprising. Fellow New Yorker, Bierach is a supremely gifted keyboardist who began playing classical piano before discovering jazz. Having had formal training in both genres, he is here the perfect foil for Liebman. After all, Beirach started out accompanying one of jazz's greatest saxophonists, Stan Getz. He also recorded two albums with the extraordinary trumpeter and vocalist Chet Baker.

The majority of pieces on CD1, commencing with Mozart's elegant "Piano Concerto No. 23," involve Liebman opting for soprano saxophone as his instrument of choice. The modus operandi on most pieces is to follow the melody, usually repeated at the end, with extemporisation in between. Whilst this is a normal pattern in jazz, there is a tendency with these tunes, as with J.S. Bach's delightful "Little Prelude No. 4," for the opening melody to fool the listener into believing that these are purely classical recitals, which they are not. Interestingly, the selection of pieces by modern composers, such as Mompou's romantic "Impressiones Intimas," Scriabin's more angular "Prelude," Bartok's exploring "Bagatelles" and Schoenberg's tentative "Colours" are all remarkably compatible with the earlier classical tunes such as Beethoven's rhapsodic "Piano Sonata No. 30."

The two outliers on the album, appearing on CD1, are originals. The first is "For Ernst," written by Beirach for Ernst Bucher. Here Liebman abandons the saxophone in favour of flute with which he affords the tune a delicate charm. The second new piece, "For Walter," was written by Liebman and dedicated to Walter Quintus. Liebman plays mournful tenor saxophone in this paean to his late friend. Both pieces take the musical form of a passacaglia, in which the tune is rooted in a repeated and ascending bass line, but crucially, they fit perfectly within the context of the otherwise classical selection of numbers.

The entire content of CD2 is devoted to the six slow movements of Bartok's "String Quartet." Beirach reveals in his sleeve notes that much of his language of modern jazz piano is attributable to the Hungarian composer. Without doubt, this selection is incredibly exciting and stirring in equal measure, propelled by its alternately differing dynamics, Liebman's tenor saxophone at times wailing to the heavens. Beirach seems to enjoy the challenge the music offers him, giving ample opportunity to provide colourful interventions. On the opening to "String Quartet No. 4" Liebman's solo appears to channel Coltrane in full A Love Supreme mode. Beirach's approach on "String Quartet No. 5" is at its most thunderously dramatic, but is met with a similarly coruscating tenor foray from Liebman.

Eternal Voices represents one of this long-serving duo's most creative apogees by combining the constraints of classical works with the freedom of jazz. The sheer exquisite lyricism of the first set of pieces is complemented by the turbulence and visceral energy generated by the Bartok suite. Either way, it's an album of rare and exceptional beauty.