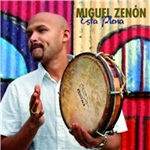 Like a nimble jet aircraft, Miguel Zenón's Esta Plena leaps into flight from its very first notes. The album arrives not long after Awake (Marsalis Music, 2008), Zenón's jazz quartet/string quartet outing of 2008, but it follows more logically on the heels of 2005's Jíbaro (Marsalis Music), a jazz meditation on the rural music of Zenón's native Puerto Rico. Esta Plena, different but related, finds the alto saxophonist melding authentic plena music with the forward-thinking jazz aesthetic he's developed as a New Yorker. The result is adrenaline-fueled and percussion-centric, even if the key to executing this riotously difficult music is Zenón's working quartet with pianist Luis Perdomo, bassist Hans Glawischnig and drummer Henry Cole. On vocals, and fulfilling the standard plena percussion roles of requinto, segundo and seguidor, are Héctor "Tito" Matos, Obanilú Allende and Juan Gutiérrez, respectively.

Of the 10 pieces, five are vocal and five are instrumental. (Zenón named each instrumental after a specific neighborhood in Puerto Rico.) The title track, "Despedida" and "¿Que Será de Puerto Rico?" have the irresistible ring of old street songs, but they are Zenón originals - such is the depth of his immersion in the plena idiom. Zenón explains in his notes that the goal was "to keep the basic plena rhythm unaltered: all in 4/4 time and with all the traditional accents." Given this, the compositional detail and variety he achieves is all the more striking. At times the insistently simple meter is clear, as in the solo sections and main vocal themes of "Oyelo" or "Pandero y Pagode" or the opening groove of "Villa Coope." Elsewhere, during parts of "Villa Palmeras" and "Residencial Llorens Torres," the plena beat is blurred beyond recognition as the quartet flexes its muscles. Throughout, there's a natural balance of roughness and romance, plainspoken melody and deftly orchestrated, through-composed form.