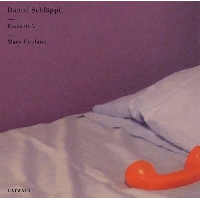 Bassist Daniel Schlaeppi, in response to his efforts in playing, recording and producing top-notch jazz for the past ten years, won a six month scholarship to come to New York in 2010.

During his stay, he heard Marc Copland's New York Trio with Gary Peacock and Bill Stewart, and afterward sent Copland an email with links to mp3s on his site. Copland responded positively and, in the end, he and Copland spent weeks playing together, ultimately resulting in the studio recording of Essentials.

This aurally ravishing album will be welcome by those who are familiar with Copland's previous work, and it ought to bring significant notoriety to Schlaeppi here in the States. The music can appreciated on many levels: the pure, limpid sound itself, for the emotions the players pull from the ballads, the depth of intellect in the harmonies chosen, the twists and turns of the lines, the sense of suspension in both harmony and time and especially, the musical connection between Schlaeppi and Copland that is on display.

This connection is the 'essential' quality of this amazing recording. There is real magic created in this most exposed setting. Now, this is Schlaeppi's gig, and as such he is recorded up front which, when combined with his huge sound, makes his bass a full partner to Copland's iridescent piano colorings.

The tune selection and pacing (including the on-the-spot improvisations) have been carefully planned, creating a framework where the rising and falling intensity interacts with music making that sounds, at the same time, both well-rehearsed and in-the-moment. In a sense that becomes more apparent as the album proceeds, the eight, generally shorter, improvised "Essential" tracks (solo and duo) provide an extremely intimate picture of the players, and are really the core around which the older and newer standards and a Copland original are hung.

When heard between these intense tracks, the recognizable melodies act as a kind of release until they are refracted and refashioned by Copland and Schlaeppi. The album opens with the first Essential, a short Schlaeppi introduction to the magnificent "Never Let Me Go," which must be included among the great performances of this tune, including that of Bill Evans on "Alone" (Verve, 1968). That Copland, who clearly has a musical connection to Evans, chose to record this tune with Schlaeppi, can surely be taken as the highest musical compliment.

From this height, the music loses none of its intensity or emotion. Another romantic ballad, "My Romance" follows, but is done in a much lighter manner. Ellington's "Things Ain't What They Used To Be" and Ornette Coleman's "Face of the Bass" do provide a bit of serious humor, but the combination of Essential 6 and the other-worldly treatment given Nat Adderley's "Work Song" is hair-raising as it is surprising.

The landing is soft and sweet, but subtly intense, with a gorgeous rendition of the Kern/Harbach chestnut "Yesterdays," followed by Schlaeppi's final solo statement, a last comment on the preceding music and a thank-you to Copland.