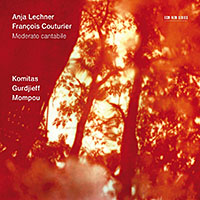 ECM Records has long divided its discography in two: the regular series, representing music of a more improvisational bent; and its New Series, featuring largely classical music ranging from the contemporary to the archaic, but more truly defined in its through-composed nature. Still, the line between the two has, however, often been a porous one, where artists perhaps most associated with one side of the fence are able to make the occasional excursion to the other side. Perhaps the artist most representative of this ability to work in both structured and extemporaneous contexts is cellist Anja Lechner. Even her earliest appearance with Rosamunde Quartett—on Dino Saluzzi's Kultrum (ECM New Series, 1998)—represented the beginning of a relationship with the renowned Argentinean bandoneonist that would lead to programs where the line between form and freedom was even less distinct, such as the superb duo recording Ojos Negros (ECM, 2007), in which overt improvisation was replaced by the more interpretive nature of phrasal nuance, harmony, dynamics and rhythmic inflection.

Since then, Lechner has regular walked both sides of the fence—or, perhaps more accurately, dismantled the fence entirely, going wherever her muse takes her without worrying about such irrelevant concerns as "is it jazz?" or "is it classical?" The cellist has, based on her discography, a clear fondness for collaborations with pianists, as recordings like Ketil Bjornstad's La Notte (ECM, 2013), Misha Alperin's Her First Dance (ECM, 2008) or Lechner's trio recording with Vassilis Tsabropoulos and percussionist U.T. Gandhi, Melos (2008), amply demonstrate. Even more longstanding is her relationship with Francois Couturier, collaborating with the French pianist in his acclaimed Tarkovsky Quartet last heard on Tarkovsky Quartet (ECM, 2011), the third in a triptych tribute to the great filmmaker that began with Nostalghia—Song for Tarkovsky (ECM, 2006).

Lechner and Couturier turn to a more thoroughly composed repertoire on Moderato cantabile, this time as just a duo, though that's not to suggest this program—which combines a trio of compositions from the pianist with yet another triptych of source material, this time from Federico Mompou, Soghomon Soghomonian (better known as Komitas) and George I. Gurdjieff—is lacking in spontaneity. What is most remarkable about this recording, by turns melancholically beautiful and mischievously playful, is how diverse yet homogeneous it is, in particular when the duo brings together pieces by Gurdjieff—that renegade for whom musical exercises were created spontaneously for loftier ideals at his Institute for the Harmonious Development of Man in the 1920s, documented and developed by his assistant, Thomas Alexandrovich de Hartmann, into more fully realized compositions—and Mompou, late in the program. Gurdjieff's "No. 11" is interpreted openly, its dark melody carried by Lechner in the lower register before the duo segues, impressionistically, into Mompou's "Lontaines No. 3," an initially more lighthearted piece with a firm hand on melody before breaking down, once again, into more abstract turf, Lechner this time playful in the upper register as Couturier combines brighter colors with spartan support.

Lechner has visited Gurdjief's music numerous times—indeed, the label seems fond of this controversial man who has yet to be accepted formally as a composer but whose music has been explored on a number of recordings, beyond Lechner's explorations with Tsabropoulos and now Couturier, in recordings by Keith Jarrett and the Gurdjieff Folk Instruments Ensemble. But the interpretations here, while somewhat less intrinsically extemporaneous than those heard on Melos, are still filled with the unexpected, even as the duo takes a nod from the Gurdjieff folk ensemble's arranger, Levon Eskenian—who, after hearing Lechner's Chants, Hymns and Dances (ECM, 2004) (her first album with Tsabropoulos and also her first to explore Gurdjieff's work) became inspired to form his ensemble and return the music to its more folkloric roots. It's to everyone's credit that, while Moderato cantabile could easily be viewed as a classical recital, it remains redolent of the Greek, Armenian and Spanish traditions that imbue its compositional contributors, even as Couturier's work with Tunisian oudist Anouar Brahem, has brought a more contemplative—and, in this context, absolutely fitting—perspective to his own writing.

As always, the sequencing of the music is key to unlocking its inner spirit. Beginning with a medley of Gurdjieff's "Sayyyid chant and dance no. 3" and "Hymn no. 7," Lechner and Couturier move from doleful to dancing, while the pianist's "Voyage," which follows, is based on a simpler set of changes and a persistent quarter-note pulse from Couturier that first supports Lechner's soaring invocation and then his own spare lyricism as he improvises with remarkable focus and near-minimalist intent. Komitas' brighter, episodic "Chinar es" is predicated on arpeggiations that shift from waltz time to, following a brief, rubato piano interlude, irregular meter as Lechner passes a 5/4 arpeggio to Couturier like a baton, only to turn to greater freedom before the piece gradually slows to a gentle halt. Mompou's "Canción y danza VI" begins darker still, with time seeming to ebb and flow around Lechner and Coutierier, as they effortlessly move as one from its out-of-time mid-section to a positively buoyant conclusion.

Steve Lake's liners connect the many threads that run through this collection of music, from Gurdjieff visiting Komitas at a Parisian asylum to the remarkable way that his music has become something of a touchstone for the label, with each successive interpretation seeming to inspire another direction, another point of departure. Dark and dancing, mysterious and implicitly beautiful, Lechner and Couturier capture Moderato cantabile's meaning—"moderately and melodiously"—with unfailing empathy to create a deeper understanding of this music than words could ever articulate.