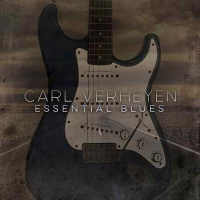 At age 63, there isn't much L.A. session guitarist and sometime member of Supertramp Carl Verheyen doesn't know about music in general and the blues in particular.

"By the time you get to my age, you've probably played the blues 10,000 times," he says ruefully.

Of his latest album, Essential Blues, Verheyen says: "With this album, I wanted to put down some of the things that are important to me about the music but to try to make it different; not just another guy playing the blues." He succeeds brilliantly.

Armed with only two guitars, he took off for Sweetwater Studios in Fort Wayne, Indiana, where, backed by three fellow session musicians, he gave himself just three days to cut the album.

The result is a spare but quite classic album in marked contrast with his last release, The Grand Design, which required dozens of overdubs. He says: "On that one there were background vocals, keyboards and effects in the mix used to bring each song to its fullest level of fulfilment. But on Essential Blues we took the opposite approach. Everything was recorded live except one overdub, adding piano to the Hammond B-3 that was played on a basic track."

The opener of the new album is the Isaac Hayes song "I Take What I Want," first recorded by Sam and Dave in 1965. Verheyen takes it along at a cracking pace, generating such immediacy you'd think it was written yesterday.

It's followed by the Freddy King blues "Someday After A While," with Verheyen fearlessly going up against covers by fellow guitar heroes like Eric Clapton and Joe Bonamassa.

Then there's the self-penned "Stealing Gasoline," about a real life incident when he was a teenager in which he stole gas to get from L.A. to San Francisco for a concert.

Another original, "Dodging The Blues" is marred by a nerve-jangling piping Hammond organ solo.

He bows out with a soulful, no nonsense version of Ray Charles' "Hard Times," sounding eerily like Paul Simon in the opening lines.