BY ERNEST BARTELDES
June 4, 2008
Sign in to view read count 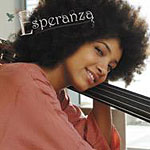 On this major label debut, bassist/vocalist Esperanza Spalding demonstrates plenty of eclecticism, taking on styles ranging from samba, hard-driving jazz and R&B, a risky combination in less confident hands. However, Spalding revels in the multiple directions without ever sounding pretentious.

The Berklee College alum opens the disc singing in fluent Portuguese, with a small hint of an accent, on "Ponta de Areia," a Milton Nascimento/Fernando Brandt composition originally featured on Wayne Shorter's Native Dancer and often covered by many Brazilian artists. On the funk-inflected original "Precious," she gives a humorous take on a one-sided love affair. More equitable romantic bliss is the theme of the ballad "Fall In," featuring pianist Leo Genovese as sole backing for Spalding's confident but laid-back vocals.

Spalding shows strong improvisational skills on "I Adore You" and "If That's True," the latter featuring an inspired solo from saxophonist Donald Harrison. Also worth noting is "Samba em Preludio," a rare Baden Powell/Vinicius de Morais composition (Morais is best known for his longtime partnership with Antonio Carlos Jobim). She starts the piece off singing the original Portuguese lyrics over her solo bass; around the one-minute mark she is joined by guitarist Nino Josele, who provides a hauntingly beautiful solo in addition to flamenco-flavored accompaniment.

Esperanza demonstrates that Spalding is an artist in development who keeps an open mind, avoiding the trappings of niche genres. She is a talented singer, bassist and tunesmith who is willing to take risks and explore different influences as a tool for her creativity.