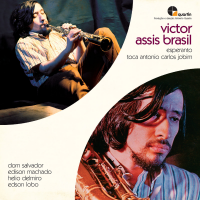 Victor Assis Brasil's passing in 1981 at the age of 35 was felt by jazz fans inside and outside his home country of Brazil. He was a major talent in the 1970s whose South American-bop mashups earned him a ticket to tour three continents.

Far Out Recordings has repackaged two of his finest LPs on a new CD/vinyl/digital download. In addition to the original albums, we get two previously unavailable tracks—alternate versions of "Marilia" and "Ao Amigo Quartin."

Brasil, younger brother to the classical pianist João Carlos Assis Brasil, seems in retrospect to have been in a hurry almost from the start. An aunt gave him his first saxophone at 14. By 18, the younger Brasil had his debut album done and dusted. A second release followed at 19.

During his all-too-short career, Brasil studied at the prestigious Berklee College of Music. He played with some of the greats -Dizzy Gillespie, Clark Terry, Chick Corea and Ron Carter among them.

It was during a trip back to Brazil in 1970 that Brasil started work with producer Roberto Quartin, a giant of that country's celebrated music industry. Quartin had sold his Forma label to Polygram after more than 20 releases. It was a fresh start that would blossom into a second successful label launch for him.

Both these albums came out of the same session. The performances are more bop than Brazilian. Even on the Jobim covers, it's clear that Brasil was deeply inspired by the company he kept at Berklee and by his beloved bop movement.

"Wave," one of the collection's best known tracks, is a prime example. The native beat is there, but Brasil's saxophone packs a New York City punch. It's a powerful combination.

Nearly five decades on, these recordings have aged beautifully. All at once, this is a tribute to Brasil, Quartin and Jobim. It's a potent mix.