BY DUNCAN HEINING
November 24, 2016
Sign in to view read count 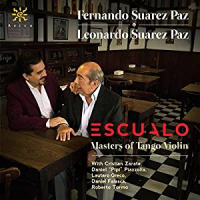 Leonardo Suarez Paz is surely now the torchbearer of Argentine Tango and the legacy of its greatest composer, Astor Piazzolla. His father Fernando Suarez Paz, of course, played with Piazzolla for many years and father and son have often performed his and works by other composers of tango. It is our fortune that Suarez Paz hijo has persuaded Suarez Paz padre out of retirement, if only one more time.

Both father and son respect tango as a living tradition—not as a museum piece frozen in time or as colour for some post-modern bricolage. In Leonardo's hands, it merges deftly with jazz. Piazzolla's "Calambre" is an excellent example of this—at times, it is as if Stuff Smith (the father) duets with Jean-Luc Ponty (the son)—one can hear instantly why Fernando was the master's first choice for so many years. In his solo, Suarez Paz Jr., uses the electric violin given to him by his father and Piazzolla to marvellous effect, a nod to the present and a cap doffed respectfully to the past. Daniel pipi Piazzolla, the great man's grandson, brings jazz drumming to the feast and it works joyously.

Piazzolla's "Escualo" also explores jazz in its improvisations from Suarez Paz Jr. and again from 'Pipi' Piazzolla but more as a set of possibilities to be explored without departing too far from the original. "La Luz de Un Fosforo" ("The Light of a Match"—a title, itself, resonate with imagery—a signal between two forbidden lovers, perhaps?) might well be my favourite track here. Essentially a trio with pianist Cristian Zarate, who arranged the tune and "Escualo" and "Calambre," this is an older composition from Alberto Suarez Villanueva. Writing this on a cold, wet November afternoon in England, the piece with its flowing rhythms and swooping glissandi is a transport of delight to somewhere warmer and more hospitable.

Escualo consists of four group performances and four duets between father and son. If the listener is more familiar with the idea of tango as primarily a dance of controlled passion and unconcealed desire, then these duets will surprise. There is a range of emotions to be traversed here, often within a single composition. "La Casita De Mis Viejos" ("My Parent's Home") begins with sharp, angular, mournful notes before opening out into something at times full of gentle fun and at others of mock rebuke. On the other hand, the jaunty air of "Pablo" has an almost self-satirising feel to it, that makes it impossible not to smile.

The other two duets, Piazzolla's stunningly gorgeous "Oblivion" and "Los Mareados" ("Tipsy") are more personal to both father and son, the former because of their connection to its composer, the latter because it was so many years in Fernando's repertoire. At nearly 7 minutes long, it is a magnificent performance filled with all the virtues of tango—"Masters of Tango Violin," indeed.

They close fittingly with Carlos Gardel's "Por Una Cabeza," one of the most internationally famous of all tangos. The performance here has the immediacy of improvisation. It is like an afterthought, casual and born of the fondness of friends and familial love, but a perfect ending to a lovely and deeply affecting record.