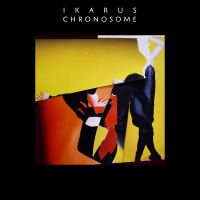 Drummer Ramón Oliveras is the composer and leader of Ikarus and Chronosome is this band's second release, after the powerful and stunning Echo . There is no sophomore jinx here, as this recording starts off where the earlier one begins only to fly higher and delve deeper while still creating immense physical soundspaces.

The album was produced by Nik Bärtsch and Oliveras, and the music of Ikarus, as stated before, does fall within somewhere within the genre defined by Ronin and Mobile, and Echo could be heard as Ronin-esque extended by the addition of the two voices.

However, with Chronosome, Oliveras and Ikarus have "evolved" (the "chromosome" part of the title) in every aspect of their music, which still having a core interest in "time" (the "Chronos" part of the title). If the first album was intense to the point of being terrifying (at times) in its extreme theatricality (see "Sanctuary"), this second album increases the intensity by deepening and widening the texture and emotional content.

Although the instrumentation has not changed (two voices —female and male, piano, bass and drums), the overall feel of the music has softened a bit on the edges, despite maintaining the same huge sound stage filled by crystal-clear voices floating over an incredibly tight rhythm section. The music still completely fills the listening space; the music has an extreme physicality; it still can be overwhelming in its emotional projection.

And yet, something has been added —a sort of playfulness —that rounds and fills out the sharp-edged white heat glowing in the pitch-black darkness.

While the opening track "Caliph" starts of with a vaguely samba-esque solo vocal, which is taken up by the band in complicated overlapping meters, it changes in its center section to powerful pulsing and pounding high drama. "Ryuujin" manages to maintain a mystical mood while scatting to another quasi-Brazilian rhythm. The longest track, "Ontake," epitomizes the playfulness that has now infiltrated the almost unbearable intensity produced by repetition. "Nocturne" is a beautiful solo piece, which could be heard as Chopin channelled through the mind of Ikarus, and which sets up and runs directly into "Obscura," which again melds playfulness with the dark side.

There is much more, of course. Oliveras and the "musical organism" that is Ikarus almost strut as they cast a knowing, winking eye from the stage. Fantastic, phantasmagoric, and masterful in its nonchalance, Chronosome is a complete musical experience; it is music in which to revel to the point of exhilarating exhaustion.