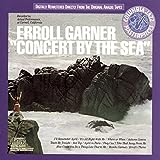 In the same way that the former St. Louis Cardinal/Atlanta Brave Terry Pendleton demonstrated that a fat man could play most-valuable-player in baseball, Erroll Garner showed that one did not have to be able to read a note of music to be influential as a jazz musician. Born in Pittsburgh, Garner moved to New York City and worked with Slam Stewart's Trio during the early heyday of 52nd Street in the 1940s. He managed to secure a sideman place on Charlie Parker's "Cool Blues" sessions, recorded in 1947 for Ross Russell's Dial Records. Garner composed the standard, "Misty" and played with an indescribable style that was firmly grounded in Swing but open to the personality of Be Bop. Garner recorded dozens of records and appeared on dozens more, but, while good to excellent, could not compare to Garner's trio performance captured on Concert By The Sea.

was recorded September 19, 1955 in the scenic confines of a converted church in Carmel, California. The sonic were atrocious and the piano was a bit out of tune. Bassist Eddie Calhoun and drummer Denzil ("Move") Best are barely audible. But, no matter, this disc has be a consistent favorite of collectors and dilettantes alike for the past 40-odd years. The recital was a typical one from Garner. It included a couple of originals, some standards, and some show tunes, all played in that Garnerian manner.

And what is that "Garnerian manner?" Having had no formal training, Erroll Garner was not encumbered by theory or common performance practice, thereby making his music quite uncommon. Garner performed with a two-fisted orchestral style that was about as anti-Bud Powell as one could get. His left hand was as much a rhythmic instrument, as it was a harmonic one. Garner's astonishing free introductions, such as that for "I'll Remember April" were forged with his left hand. Garner's lack of formal education was his greatest asset. It enabled him to explore harmony and arrangement in a postmodern manner before there was postmodernism. Take Gershwin's "They Can't Take that Away from Me." Here, Garner deconstructs the Ellington tune in grand style, roaming around the mostly in the low keys before breaking about in the upper register. Garner transforms "April in Paris," with his ornate introduction and idiosyncratic approach to the melody. I would imagine Franz Liszt playing standards this way.

is a flawed monument of perfection. This recording was a dichotomy, a paradox, where the unlearned not only prevail, but create art of a lasting quality. This is the art.