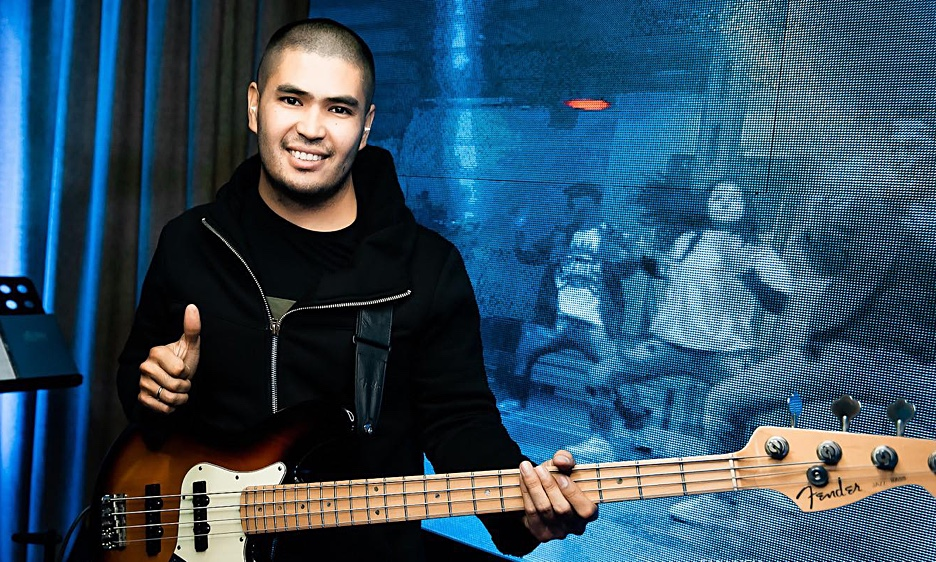 By Schaen Fox
January 19, 2022
Sign in to view read count
An unintended consequence of Stalin's murderous dictatorship is that many Soviet citizens developed a fondness for jazz after he began punishing anyone caught listening to the forbidden art form. As a result, even today in the Central Asian republic of Kyrgyzstan, a people with their own ancient musical traditions, enough interest in jazz survives that jazz is taught in at least one university. Jazz clubs have also popped up in the cities, and there is a yearly International Jazz-Bishkek Festival.

Another result is that recently, a Kyrgyzstan jazz trio, consisting of Erkin Kydykbaev on bass, his father Bakyt Kydykbaev on drums, and his brother Kuban Kydykbaev on alto saxophone, recorded their first album Ata Bala ("Father and Children") at John Lee's studio in South Orange, New Jersey. They call the trio "Salt Peanuts"—Erkin Kydykbaev explains the trio's name: "It was at our first concert in 2002. We played Dizzy Gillespie's composition and in the composition are the words 'Salt Peanuts, Salt Peanuts.' The audience was all 'Wow, Salt Peanuts,' it was something interesting for them, something new. They began to call us and they began, 'Salt Peanuts, how are you?' They all remember that name, because they all like this composition."

The 35-year-old bassist has a good command of English, and a willingness to tell his story. His mother is also a musician, a violinist in a concert orchestra performing Western classical music. He was long the family exception: "When I was a teenager, I really didn't want to be a musician." He found their constant talking about music irritating. "I liked to play football outside, but one day, my father brought a double bass home." It sat unplayed in a corner until, curious, he began plucking the strings. "My father, and mother listened. They showed me how it's usually played."

That was his turning point.

Once he started playing, there was no question of what would be his focus. "Jazz is close to me because there is freedom in jazz. I can play what I want, I can express myself this way. I feel this is mine. For example, if someone's doing classical music, they need to remember all notes written by somebody else. But it's not my character. I want to play what I want to play. Because every time you play it depends on your mood; what you feel, you can express. That's why I like jazz. I started playing at 16, I didn't have a musical education, but in two years, I entered the conservatory in my city." No doubt this was his father's influence. Like so many Soviet citizens first curious about, but then attracted to the American art form, the senior Kydykbaev had tuned his radio to the Voice of America's jazz programing, (when he could get around the government's blocking efforts), and slowly built a collection of outlawed vinyl recordings. Some were real records smuggled into the Soviet Union, but in that era, the easiest way to build a music library was to buy homemade "jazz ribs." These were medical x-rays picked out of hospital trash, cut and shaped to size with grooves cut for 78rpm play. Prices were cheap but the quality was awful, and usually little or no information came with them.

At first, the young bassist studied music videos on his own. "The first video I saw was the trio of Herbie Hancock, Billy Cobham and Ron Carter. My father told me, 'This guy is the best. You should play like him.' Ron became my favorite bassist. I found his website and I wrote to him. 'I'm from Kyrgyzstan. I'm trying to play bass.' He replied, 'Give me your address' which I did, and in one week, I got a pack of books, strings, and CDs from Ron Carter It was unbelievable for me that I got all these things from him. And we're still really good friends."

As part of his education, in 2008, he first came to America to study English in Boston for three months. Music, however, was still his focus, and he took advantage of any opportunity to see his heroes. "I bought a ticket to go to New York to go to this concert of Bobby McFerrin, Jack DeJohnette, and Chick Corea at Carnegie Hall. I was in the last row, it was the cheapest ticket. I was looking, I couldn't see them up close. But they were all so free, the sound was amazing." Before the concert, he had walked around the great jazz mecca, and when he reached the hall, he sat to rest and just watch people pass. One looked familiar. "I looked at him like it's Bobby McFerrin, but it really was McFerrin. I ran up to him and I began to speak with him and take a picture. Previously, I knew him by videos, that's all. So, when I saw him in the street, he was like a regular guy, but for me, it's not normal, it's amazing like this was my friend. This was fantastic. I just saw him on the street."

Naturally, meeting his great benefactor was paramount, but not immediate. "He called his son who lives in Boston, and he asked, 'Can you meet him?' His son took me to the restaurant, and he gave me a t-shirt. For me it's something unbelievable." Finally, he did meet his hero. "I wrote that I want to meet with you. He told me, 'Come to the Birdland. I will put you on my list.' I was waiting when he [came in.] It's him like life, it's 'Oh my God, is Ron Carter, and we hugged each other. Wow, it was great. And after that, he introduced me to the owner of Birdland jazz club, Gianni Valenti and Gianni, who I became friends with, and told me "One day you will play here. Believe me, just write to me and we will set up all.'"

"I wrote to him, 'When can I play at Birdland? He told me, 'Let's plan like in September. I will look at the schedule and I will put you in whichever day you want. It will be your day.' And he put me in on a Sunday.

Since then, Salt Peanuts has performed several times in the United States, primarily at The Kennedy Center and Blues Alley in Washington and Birdland in New York. A few months ago, they traveled to New Jersey because saxophonist Antonio Hart had recommended John Lee's recording studio as one with really good sound. The three musicians were delighted with the results. Kydykbaev said, "John Lee gave us what we needed. His studio is our first experience in a really professional grade studio. At home, everyone will know that we are here and making the recording in an American studio. They all want to listen to really great jazz sound." Always, Kydykbaev thinks of the jazz master who made this all possible. "When I come to New York. I think about Ron Carter, I feel warm in my heart that he's around somewhere. I can call him, go to him, talk with him. I feel like the happiest man in the world."