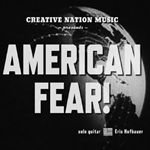 With American Fear!, creative guitarist Eric Hofbauer once again exposes his funny bone, effectively demonstrating that jazz and humor are not mutually exclusive. Like American Vanity (Creative Nation, 2002), this is a solo guitar effort mixing unusual covers with quirky originals, all delivered with the Boston-based artist's extroverted minimalism.

There are no disposable notes in this suite of vignettes, each track a meditation on the various ramifications of fear, whether from childhood ("Monsters Under the Bed"), adolescent angst (Nirvana's "Smells Like Teen Spirit"), recession-era depression ("Bailout Blues") or general ennui ("Broke Down...Breakdown," the only overdubbed track). Although "Moose the Mooch-Cash Style" features prepared guitar, with paper-threaded strings that sound like a marimba made with PVC pipes, the rest of the tracks are recorded with an unadorned electric-acoustic sound, remarkable for their panchromatic palette of tones and textures: Hofbauer uses damped harmonics, slides, whammied chords, radical dynamic contrasts and register leaps, tickle-scratches and two-handed tapping to color and shade his musical images.

Van Halen's "Hot for Teacher" is shred-full bebop-a-boogie; "The Jump Jump" keeps about four balls in the air at once, like Joe Pass in overdrive; "Her Hiding Place" and "American Wonder" are short, poetic pieces with lush open chords and expressive glissandos; "Black and Lost Blue Highway," an uncanny amalgam of Hank Williams and Fats Waller, features chunky bass licks and gutbucket growls. For all its variety, drawing on recognizable elements of jazz and other musical traditions, Hofbauer's voice emerges here unique and distinct, blending the comedic with the tragic—and having some serious fun.