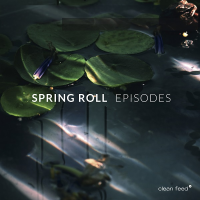 French flautist Sylvaine Hélary's Spring Roll follow up their ambitious debut Printemps (Ayler, 2015) with another adventurous outing on Episodes. While the first disc incorporated words and voices, the twist this time is that Hélary commissioned works from three of New York City's finest composer-improvisers, pianists Matt Mitchell and Kris Davis, and saxophonist Dan Blake, to supplement two numbers from the band. In addition to the 2018 studio session responsible for most of the recording, Davis appears as a special guest on two cuts captured live at Sons d'Hiver in 2017.

Hélary may be best known as a participant in Michel Edelin's Flute Fever alongside fellow flautist Nicole Mitchell, and also as a member of pianist Eve Risser's White Desert Orchestra, but she is developing apace as a leader in her own right.

While the instrumentation of flutes, Hugues Mayot's reeds, Rayon's keyboards and Sylvain Lemêtre's vibes and percussion could suggest a chamber ensemble, the reality is far less easily categorized, integrating jazz, contemporary and world music influences. The album is aptly named, as it's not only the multifaceted title cut which rejoices in timbral variety and sudden mood switches. Even though the band seems melodically inclined, the writing tends to the unexpected, something inevitable given Hélary's choice of composers.

Hélary oversees a program of intertwining layers which juxtaposes improvisation against the complex charts in a variety of ways. It all helps promote the illusion of a larger group. Partly that is down to the rich palette that derives from doubling, whereby Lemêtre keeps the beat with percussion, while still working the vibes, while Rayon uses his Moog to hold down occasional basslines as well as more exotic sonorities, and Mayot shifts between tenor saxophone and clarinet. Consequently there's a lot of music packed into the 46-minute running time.

Everyone, even Hélary, seems remarkably selfless, devoted to the needs of the ensemble. She restricts herself to a single solo, flowing over electronic bass, throbbing piano and light cymbals on "Episodes," one of several notable sections in the piece which also include a striking gamelan-inflected passage from vibes and Moog.

Davis' "Active Membranes" links sequences like the playful opening saxophone and flute duet, and later a freewheeling piano feature for Rayon, to create a mysterious aura. Davis augments Rayon's keys on the next two tracks. The first is Rayon's "Ballade Pour Rémi," a focused atmospheric piece in which an elegiac swell repeatedly emerges from intermittent percussive textures. The second is Mitchell's "Neither Nearly Nor Neatly," as replete with busy darting lines and shifting patterns as you might expect, in which both pianists get the opportunity to stretch out, singly and in tandem. Blake's "Laggo" provides an intricate and enigmatic closer to an absorbing disc.