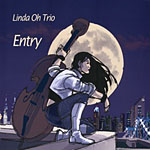 First appearances and sounds can be deceiving. Linda Oh's petite stature defies the muscularity that her instrument emanates—a knotty booming bass that's at once authoritative and free flowing, delivered with momentum and zest. And like the well-noted arcos of Charles Mingus, Dave Holland and Charlie Haden, Oh already has the traits to become a noteworthy player and leader, as witnessed on Entry.

Oh's debut is a trio recording with peers who are all etching their marks in the music—Ambrose Akinmusire, one of the brightest young trumpeters around, and Obed Calvaire, a drummer of power and finesse who has worked with Kurt Rosenwinkel and many others. Together they create and don't just perform music, as Oh states, "The concept behind this group is to create something raw and with an edge." And that it does. Entry avoids the debut trap of displaying too many forms. There's no myriad of styles just for the sake of showcasing the artist's talents; instead the focus illuminates the musicians' abilities and relationship.

It becomes obvious within these nine tracks (eight originals by Oh and one by the Red Hot Chili Peppers) that there's a unique dialog between the players; an exchange of ideas in compositions, melody and heavy improvisation. Things do get funky, swing hard, and evoke mood, but not just in the normal conventions.

One of many examples is "Numero Uno." Akinmusire's multi-horned intro segues into Oh's incredible bass pattern, followed by Calvaire's exploring kit. The three then interject and extract ideas into freer territory with a fervent purpose. "Fourth Limb" follows, as Oh's fingers weave sinewy lines that are as complex as they are mesmerizing, leading to a solo statement that rivals the best.

There's a surprise around every corner: a syncopated movement in "Gunners," with Akinmusire's snarling horn; a European flair in "Before The Music"; and an ode to bebop in "201" (memories of Charlie Haden and Don Cherry), where Oh's thunderous solo is shadowed by Calvaire's pyrotechnics. But Oh will not be pigeonholed; her read of the Chili Peppers' 1991 hit song, "Soul to Squeeze" is played with empathy, yet much bravado, signaling that she can rock it and jazz it on her own terms. Entry is outstanding.