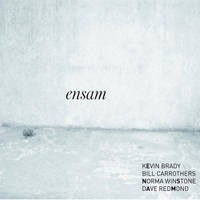 The trans-Atlantic trio of drummer/composer Kevin Brady, Bill Carrothers and Dave Redmond first came together in 2006, since when it has toured more frequently than it's recorded. Ensam (LRP Music, 2016), the group's third outing, following Common Ground (The Livingroom Project, 2007) and Zeitgeist (Fresh Sounds, New Talent, 2009), is an intimate three-way dialogue, with veteran English singer Norma Winstone adding lustre to several tracks. Brady—who penned all the original tunes—leaves an abundance of room for his colleagues to explore within the shifting frameworks of these subtly hypnotic compositions.

Atmospherics trump virtuosity on "How the Other Half Lives," one of the album's longest tracks, which stems from an insistent bass pulse and circular piano motif. Brady's light yet propulsive approach, notably on cymbals, fans and in turn fuels the trio's fire as the music's intensity ebbs and flows. Carrothers plies an elegantly free-flowing course, spurred by Redmond's rhythmic and melodically searching impetus. Closer-knit playing characterizes the rhythmic cat-and-mouse of "Checkpoint Charlie," which features some terrifically accelerated yet stylish soloing from Carrothers, like Bill Evans at 78rpm, whereupon bass and drums engage in a light-hearted rally. Density and levity, interlocking groove and greater abstraction are the striking binaries that course through the trio's language.

Redmond's lilting bass introduces the seductive title track, a slow-cooking ballad steered by Brady's steady timekeeping and with Carrothers' gently tumbling exploration at the epicentre. Arguably the album's most lyrical track, the trio's flame flickers and flares teasingly. The baroque undercurrents that introduce "Just Sunset" give way to brushes-led balladry, with Winstone in typically compelling form. The singer brings whispered gravitas to a haunting version of "But Not for Me"; George and Ira Gershwin's standard has never sounded so brooding, with Carrother's pedal sustain, Redmond's economy and Brady's rustling percussion conjuring a dream-like melancholy. By way of contrast, Winstone and Carrother's ply cheery unison lines on Keith Jarrett's jaunty, blues-laced "Southern Smiles."

With Brady's trio members all involved in myriad projects—and divided by the Atlantic Ocean—it may well be that this combo continues, as it has done for ten years now, as an occasional reunion of like-minded spirits. Yet if the quality of the music always matches the deeply personal, engaging narratives of Enasm, then that won't be a bad thing at all.

How The Other Half Lives; Checkpoint Charlie; Ensam; Just at Sunset; Libertine; Yoopers; But Not for Me; Southern Smiles; The Night We Called it a Day.