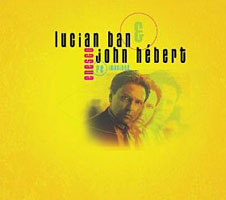 The life and music of the prodigiously talented Romanian violinist, composer and conductor, George Enesco has been well-preserved and generously honored—not simply by the cognoscenti, but by the appreciative audiences of Romania's George Enesco Festival, that was set up to propagate the music of the composer beyond its preservation in the museum that bears his name in Bucharest. This ingenious album of some of his best-loved work, by another extremely talented Romanian-born pianist and composer, Lucian Ban, is hardly surprising, then. Recorded at the biennial George Enesco Festival in 2009, and cleverly titled Enesco Re-Imagined, it is a spectacular, dreamy affair, rooted, no doubt, in the celebrated musical reality of the celebrated 19th/20th Century composer.

Enesco was a great violinist and an even greater composer, who was beguiled by the world of music that spread across the globe. In the late '20s, he was known to have taken his most famous pupil, Yehudi Menuhin, to a performance of a Gamelan orchestra from Indonesia that performed in Paris. Around that time, Enesco was also known to have rehearsed some music with Uday Shankar, the musician and dancer-brother of famous Indian sitarist, Ravi Shankar. Enesco also had a great ear for Romanian folk music and its influence can be heard throughout in his music. Set against this backdrop of Enesco's devotion to ethnomusicology, Ban's interpretations of the great Romanian composer's work are brilliant, showing an astute understanding of Enesco's proclivities and also a deep understanding of the composer's work—something shared by bassist John Hébert, who also shares in the credits as having arranged Enesco's work for this project.

Enesco's work is well-represented here, from the beautiful scherzo for violin, viola, cello, bass and piano. "Aria in Eb," to the 2nd movement of the composer's unfinished, 4th Symphony. The writing for strings is exquisitely adapted for horns as well, and Ban also shows some ingenuity in his writing for percussion instruments, such as the tabla in the second movement of "Sonata No. 3," and elsewhere in the "Orchestral Suite" and "Symphony No. 4," and the trap drums throughout the album's scored work. The exquisite counterpoint of horns, strings and percussion in "Octet" demonstrates absolutely masterful writing, and shows Ban's sensitivity for Enesco's great ear for the sound palette. A spectacular pianist himself, Ban subdues his own pianism, but elevates his overall musical voice to soar with Enesco's throughout the set. Hébert's playing also displays great melodicism, as he negotiates very difficult parts of the score—typically in the adagio movement of Enesco's "Piano Suite No. 1."

This is a wonderful piece of work, and hats off to Sunnyside for its foresight in seeing the ingenuity from Lucian Ban's perspective. Violinist Albrecht Maurer's work, as well as that of violist Mat Maneri, together with the rest of the ensemble—especially the percussionists-are additional testaments to this fine album.