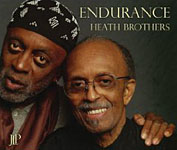 The Heath family is illustrious in jazz. Percy and Jimmy got their starts in the late forties, a part of the emerging jazz scene in New York. The oldest, Percy on bass, became part of the Modern Jazz Quartet in 1952 and stayed with the legendary group for over forty years. Jimmy on reeds, meanwhile, has led and performed with the greats over the years. He has a substantial reputation as composer, arranger and educator. Albert "Tootie," several years the youngest, has established a reputation as a peerless drummer and educator.

The three have worked together as a group for over twenty years, making seven recordings together, with pianist Jeb Patton the fourth cog in recent years.

When Percy died in 2005, the brothers decided to carry on, bringing in bassist David Wong. Endurance is the first without Percy, and endurance is certainly the keyword in describing the Heath Brothers.

Seven of the nine numbers here are originals by Jimmy. Each player gets many opportunities to shine. Beginning with "Changes," Jimmy's straight-ahead assertive tenor takes charge. Next, on "Wall to Wall," Tootie's drums and Patton's piano combine for some funky rhythmic fun at the onset, followed by Jimmy's rocking tenor solo. Wong's bass stars on "You and Me," sharing the stage with Tootie's spiffy brush work.

Jimmy gets serious with the spiritual "Ballad for Leadership Suite," an impressive segment from his commission for the inauguration of the president of Howard University. He dedicates "Two Tees" to Tootie, who gets plenty of room to stretch in his drum solo, with Patton coming in for a romping turn on piano.

Perhaps most effective is the group's lush rendering of Vernon Duke's 1934 standard, "Autumn in New York." Here, Jimmy shows his debt to Coleman Hawkins with his breathy tenor probing all aspects of the tune.

Changes; Wall to Wall; Ballad from Leadership Suite; Dusk in the City; Two Tees; Autumn in New York; From a Lonely Bass; The Rio Dawn.