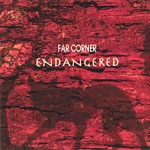 Despite efforts to change its reputation in recent years, Milwaukee, Wisconsin still seems like an odd place to find a forward-thinking group that puts the "progressive in progressive rock. Far Corner's self-titled 2004 debut demonstrated that the most wondrous music can come from the most unlikely of places, and Endangered takes things a step further. Fans of Univers Zero (whose 2006 Cunieform release Live found its way onto many progressive top 10 lists for the year) will find much to like about Endangered although Far Corner can, at times, demonstrate a far more aggressive rock stance than the longstanding Belgian Rock-in-Opposition group.

The focus of this oddly configured group (keyboards, bass, drums, cello) remains dark-hued and, at times, ominous composition that references 20th Century classical music and '70s progressive groups including King Crimson and Emerson, Lake and Palmer in equal parts. The group's first album consisted entirely of material by keyboardist Dan Maske, but Endangered's title track takes an innovative and creative approach to collective composition. Much like a story round, where one person begins a tale and passes it on to the next person to enhance, augment and further develop, this twenty-minute piece evolves as each member of the quartet takes what came before and moves it forward.

The base textures of the group remain the same. Maske's emphasis is on organ first, piano second and synthesizers a distant third. Cellist Angela Schmidt demonstrates the ability to be lyrical and delicate one moment, harsh and metallic the next as she adds distortion to her instrument. Uber-bassist William Kopecky assumes the dual role of rhythm section anchor and contrapuntal melodist, while drummer Craig Walkner is equally pluralistic as assertive propeller and textural colorist. Here, however, the group expands its sonic palette, with Maske adding trumpet and melodica to the mix alongside Kopecky's spring drum and Schmidt's violin and bamboo flute.

Improvisation also remains a fundamental component, despite Far Corner's largely composed repertoire. It may alternate between regular and irregular meters, but the acoustic-driven "Not From Around Here actually swings, featuring a lithe and passionate solo from guest violinist Jerry Loughney and an equally impressive turn by Kopecky. "Claws, on the other hand, feels more like collective free improv despite Maske's compositional credit.

As undeniably talented Far Corner is, it remains clearly committed to the demands of the music, with none of the showboating or excessive self-indulgence that sometimes gives progressive rock a bad name. Endangered is an even better record than Far Corner by a group that is becoming more comfortable, cohesive and experimental while losing none of its edgy appeal.

Inhuman; Do You Think I'm Spooky?; Creature Council; Claws; Not From Around Here; Endangered.