Talibam!: End Game of the Anthropocene

By Glenn Astarita
January 8, 2018
Sign in to view read count 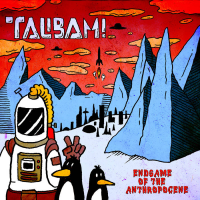 New York-based Talibam! returns to ESP-Disk' with an interesting take on environmental matters by declaring, "It is the soundtrack to 2048's despotic nationalism and crumbling international infrastructure, underscoring an eco-mercantilistic tragedy and the desperate plundering of the last pristine landscape on Earth. This inevitable destruction of Antarctica's purity marks the global-environmental endgame of the Anthropocene." On that note, the musicians seem to be concerned about the global exploitation of natural resources, and while I'm not privy to what's going on in Antarctica, other than science camps and oil-drilling initiatives, these dynamics certainly warrant serious consideration.

On "Obsequious Resources Duly Exploited De Novo," the musicians infuse an electronic tribal dance, shaded with Mottel's circus vibe, segueing into the following piece, Breach of Ecology on the Seabed (Biodiversity in Shambles)" which is sketched on foreboding scenarios and corpulent bass lines. The excitement continues during "RISE OF THE DEFENDERS OF ANTARCTICA," steeped within a loose-groove funk vamp, an ethereal melody and a surfeit of melodic twists.

Again, the album progresses rather expeditiously, so a few upfront previews may be in order before kicking into tenth gear for the holistic listening experience, as the duo invites you into their rather prismatic plight, instilled with odd-metered blowouts, and more. In a way, the band morphs the history of space rock into a mind-blowing psychodrama that reveals previously undetected surprises on additional spins.

Antarctica shall be used for peaceful purposes only (Article 1); Human Interference and the Failure to Ratify; Reign of Primordial Tenure on the Ice Shelf; The Telegenic Annexation of Territorial Expanse in the West; Obsequious Resources Duly Exploited De Novo; Breach of Ecology on the Seabed (Biodiversity in Shambles); Cost-Effective Drilling Enabled by Pioneering Technologies and Warmer Climates in the Southern Ocean; RISE OF THE DEFENDERS OF ANTARCTICA