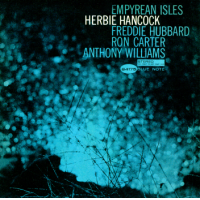 As a member of Miles Davis' second quintet during the 1960s, pianist Herbie Hancock rarely performed live under his own leadership, but he did take the time to record. Hancock's 1964 effort, Empyrean Isles, remains one of the most diverse and often challenging records of the pianist's tenure with Blue Note Records. It's a rare jazz record that offers both a hugely popular hit, as well as an outré masterwork of rhythmic repetition and angular melodies.

A masterpiece like Empyrean Isles deserves a first-class reissue, and the good folks at Music Matters have undertaken to press the ultimate vinyl version. With access to the original master tapes, some of the finest cutting and pressing equipment available, and a boatload of enthusiasm, they've cut what was a single LP onto two 180g 45 rpm discs that simply smoke any CD version ever released. Packaged with a deluxe, full-color gatefold jacket, and additional Francis Wolff session photographs inside, this pressing is a feast for both the aural and visual senses.

Empyrean Isles is best know for the hit "Cantaloupe Island," which alone is worth hearing on this vinyl edition. The sound is large and smooth, and the piano—which can sometimes sound boxed in on Van Gelder recordings—is almost full-sized. Most importantly the weight of the piano chords come through loud and clear. What is most startling is the amount of additional information revealed through this true analog pressing. Freddie Hubbard's trumpet is brassy and rich, and Ron Carter's bass, which can often lack tone and depth on CD, is plump and three-dimensional. "Cantaloupe Island" has become one of the most ubiquitous jazz songs ever, especially after being sampled by Us3 for their hit "Cantaloop (Flip Fantasia)." A pressing like this will make people question whether they've ever really heard it at all.

The real meat of Empyrean Isles—its adventurous heart—lies with "The Egg," A thirteen-minute exploration of the limits of beat repetition that includes some of Hubbard's most restless trumpet playing. He strains his horn against the locked rhythm, looking for a way out that never comes. It's a fascinating juxtaposition of improvisation over rigid reiteration. On this Music Matters pressing, those elements have never been clearer, with the Tony Williams' drums revealing particular snap and scale.

Like most albums in the Blue Note catalog of the 1950s and '60s, Empyrean Isles was recorded at Rudy Van Gelder's studio in Englewood Cliffs, New Jersey. That pedigree leaves a few period sonic fingerprints, but on the whole, with the proper care taken in this remastering, this recording offers a wealth of fresh detail and enhanced musicality. Empyrean Isles has fared well through the Music Matters process, yielding a pressing that will truly augment an understanding of the music.