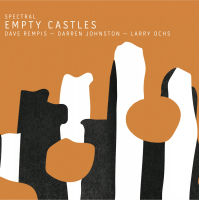 The trio Spectral might best be examined in the aviary of your local zoo. Trumpeter Darren Johnstonand saxophonists Dave Rempis and Larry Ochs are like three different bird species, but share the same genus. Their "song" is built from the unique coop in which they find themselves.

The music on "Empty Castles," their third release following the self-titled 2014 debut and a digital only release, Neutral Nation (Aerophonic, 2016), accentuates that aviary approach. The music was recorded in a 12,000-square foot abandoned munitions bunker situated in the northeast corner of San Francisco Bay. The unique space created a natural (and unalterable) reverb which the players had to factor into their performance. Somewhat like Pauline Oliveros' cistern recordings, the sound echoes, making this trio huge and, well, honking.

Ochs of the famed ROVA Saxophone Quartet and Johnston (The Electric Squeezebox Orchestra, and Lisa Mezzacappa) make up the West Coast component of Spectral, while Rempis brings the Chicago touch. The music is made up of the song of birds, the growl of the primary, and the chirping of the flock. Much of the music is a three-way call-and-response, taking into account the unique acoustics of the bunker. The brightness of the sound is memorable and it affords no hiding place. Each player has to deal with both sound and silence. The latter being the policeman here. Spectral, by definition refers to a disembodied ghostliness, and that may be the best descriptor of the sounds here.