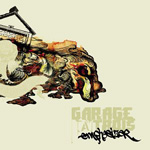 When was the last time you had fun listening to a jazz record?

I’m not talking about the seriousness of the neo-conservative suit-and-tie hard bopper syndrome, people who perform the “listen to this music, it’s good for you” kind. Nor the avant “we don’t expect (want) you to understand or actually like our stuff” kind.

I mean the type of music you would make if you were a musician yourself. Music that draws from all your collective listening habits and years of first AM, then FM, radio dialing.

Garage a Trois is just such a band.

Their concept of mish-mashing musics is not new. Charlie Hunter formed T.J. Kirk to blend the unique music of Thelonious Monk, Rahsaan Roland Kirk, and James Brown. Skerik played in the short-lived freedom jazz/funk band Ponga, responsible for perhaps the best collision of jazz and technology to date. Their self-titled Ponga (Loose Groove 1999) is well worth the search.

Much of the collective band’s experience is exploited here. None of it adheres to tradition. They position a Japanese drumming opening on “Interpretive Ape Dance” before by a Middle Eastern suona double reed (sounds like a musette) solo. Hunter covers Thelonious Monk’s “We See” in a mawkish ‘all-couple skate’ motif.

Because they can, and it's an opportunity for mischief.

They also employ Charlie Hunter's signature sound on “Sprung Monkey” and “Gat Swamba,” drawing from his large-and-getting-larger eight string guitar. What makes a difference on Emphasizer is the assembled parts. Skerik doesn’t just accompany, he leads, coaxing Hunter to shred a bit. Dillon exercises varying percussive devices, encouraged by Stanton Moore. Where else does a funk line circa 1977 disco give way to tabla playing over Tower Of Power horns?

This is bar band music sure to please party goers. “Delta Skelta” is a topnotch blues shuffle and “Plena For My Grundle” could easily be mistaken for a Buena Vista Social Club recording.

The disc ends with a ringing all-percussion piece, “House Of The Hand Wash.” It ain’t your typical jazz ensemble, but then again aren’t garage bands supoosed to be all about fun?