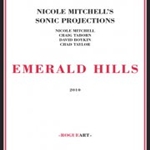 In some ways Chicago-based flautist Nicole Mitchell's Emerald Hills resembles an old style AACM record: there's an adventurous spirit, a diversity of approaches, and chops to burn. More recent reference points include Mitchell's own Xenogenesis Suite (Firehouse 12, 2008) but (largely) without the challenging vocals. Joining Mitchell in the quartet she calls Sonic Projections, are long time associate David Boykins on tenor saxophone, Craig Taborn on piano and Chad Taylor behind the traps.

A lot of detail is rammed into the 71-minute program. Mitchell's writing frames opportunities for exploring all the combinations inherent in the band, often with the flautist taking a back seat. In particular it provides a great showcase for Boykins who boasts one of the largest tenor sounds this side of David S. Ware, but doesn't too often get the chance to prove it. Taborn also benefits from the generous solo space whether propounding angular pyrotechnics or endowing his hands with independent motion at opposite ends of the keyboard.

Mitchell displays her distinctively expressionistic approach to the flute, whereby her blown multiphonics are expanded by vocalizations in symbiotic interweaving, for added emotional kick. Overlapping voices open the portentous "Ritual and Rebellion," recalling similar gambits by Muhal Richard Abrams and the Art Ensemble Of Chicago, while Mitchell's naïf, half-spoken lyrics enter the mix on "Affirmations." Fortunately for those who prefer to avoid vocals, such moments are few and do not detract from the heavyweight instrumental work, and the piece develops intensity with darting flute, Taborn in full flight and Boykins slow burning tenor preaching.

Flute and tenor saxophone harmonics intermingle on "Wild Life," Boykins squeaks in contrast to buzzing growls from Mitchell in a striking role reversal. Taylor gets down in a series of duets, sandwiched between edgy themes, on "Chocolate Chips," where his earthy drums ground the leader's spiraling declamations. Taborn shines on the title track, his ringing piano shadowing Taylor's choppy clatter as the horns juxtapose a repeated unison, getting wilder until a grinding halt. "Peace" is all wavering overtones and single struck notes, forming a palate cleansing finale to one of Mitchell's strongest albums.