By IAN PATTERSON
March 9, 2009
Sign in to view read count 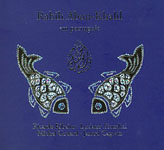 Musical alchemist, oud virtuoso and springer of surprises, Rabih Abou-Khalil has never been shy about immersing himself into challenging musical environments. So the suggestion by Ricardo Pais, director of the Teatro Nacional Sao Joao, Porto to have Abou-Khalil write music to the words of five Portuguese poets represented an irresistible challenge. The project sees Abou-Khalil utilizing a singer for the first time—the impressive fadoist Ricardo Ribeiro. Em Portugues however, is not fado, but a marriage between its poetic, blues spirit and the imagination of Abou-Khalil. The music lies firmly in the bed of the rhythmic complexities and melodies stemming from his Arabic roots and wider musical vision. The result is both challenging and powerful.

It may seem like an odd project, but the oud is not such a distant cousin of the Portuguese guitar and there is an obvious symmetry between the poetry of fado and Arabic song; odes to love, yearning, loss and unrequited love are central to the great body of songs of both cultures, and these poems of the heart and soul must have resonated with Beruit-born Abou-Khalil on a deep level. It wouldn't be impossible to imagine Egyptian legend Om Kolthoum or Lebanese diva Fairouz singing here.

Vocalist Ricardo Ribeiro's powerful baritone voice and rich timbre invest gravitas and beauty on these poems, turning them into songs of vitality and emotional depth. "Como un rio," where his voice is operatically powerful as he in- tones: 'If the night can shelter me ah this sun, this sun, ah this sun is nothing..." then tender in turn, brings all the elements of this experiment together—beautiful lyrics animated by Ribeiro, subtly shifting dynamics, and exhilarating oud playing from Abou-Khalil. There are fewer exhibitions of oud virtuosity here than on the haunting Songs for Sad Women (Enja, 2007) but as always Abou- Khalil is a team player, surrendering himself to the needs of the music. For the most part his oud rides on the wings of Ribeiro's wonderful voice.

Although Ribeiro is arguably the star, this is most definitely a Rabih Abou- Khalil record; the feeling of familiarity which permeates the music of such an original project is down to the chemistry provided by long-standing sidemen Michel Godard on bass, serpent and tuba, Jarrod Cagwin on frame drums, and the tasteful employment of accordion by Luciano Biondini, who has recorded with Abou-Khalil before, on Morton's Foot (Enja, 2007). Broadly speaking, unison lines follow the contours of the songs, although Godard shines on a solo on "Casa de Mariquinahs" accompanied by the wordless voicing of Ribeiro which recalls the great Qawwali singer Nusrat Fateh Ali Khan for power and expression.

The sound translation into English of the intimate, brooding and joyous poetry contained in this beautifully packaged CD, bring these songs to life. The imagery is colorful, moving and unforgettable: "Lovely woman, intimate being, left like an unread book..." These songs are like strange but beautiful stones—hard to put a name on, but most definitely precious.