BY GLENN ASTARITA
August 21, 2008
Sign in to view read count 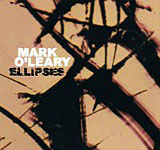 Irish guitar wunderkind Mark O'Leary has now set his sights on the jazz-fusion element, to complement his already expansive improvisational vernacular. This 2008 effort might open up a few more doors for an artist who possesses the goods to go anywhere he darn well pleases. For this project, O'Leary and his trio investigate black hole stars and prismatic galaxies, where time and space have no bearing on anything except the music at hand.

During various interludes and movements, the trio transmits a portrait of uncertainty within the vast reaches of interstellar space partly due to Storløkken's bursting and silvery synth notes to complement O'Leary's rip-roaring single note attack. Think of shooting stars across a midnight sky. But it's also about colorific noise-shaping. With a string of highs and lows, the trio either pulls out the proverbial stops via blistering interplay or descends into an eerie and mysterious chasm of sound and scope. It's an aggregation of electronic soundscaping, teeming with darting abstracts amid variable degrees of intensity.

On "Maskerade," Herndon lashes out with a succession of polyrhythmic grooves while Storløkken executes steely synths and sampler sounds. The closing "Theme from Jack Johnson" is simply a mind-bending workout, loosely based on Miles Davis' well-known composition of the same name. Perhaps it's an inspirational ode to Miles' electric fusion years, since this free-rock jaunt finds O'Leary literally punishing his axe via a succession of awe-inspiring riffs atop his bandmates' otherworldly treatments.

Ellipses is a powerhouse album and offers a zesty antidote to the fuzoid roads frequently traveled. O'Leary and associates zoom into a different musical dimension with linear momentum and no looking back.