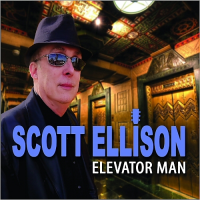 Tulsa, Oklahoma-native Scott Ellison looks like an accountant (not unlike fellow blues musician George Taylor), sings a bit like a dustbowl Howlin' Wolf and plays guitar like Old Scratch from the corner of Highways 49 and 61. Dusty Oklahoma is the home of many fine musicians not the least of whom include Leon Russell, J.J. Cale, Carl Radle and Chet Baker. Ellison adds to this impressive mystique on his third recording, Elevator Man, which follows his well recieved Ice Storm (Self Produced, 2008) and Walkin' Through Fire (Self Produced, 2012).

Ellison illustrates that the universe of contemporary blues, like the physical universe, continues to expand outward in an accelerated fashion. Ellison addresses his blues, playing straight standard guitar and slide guitar. His style ranges from the stark Louisiana boogie of "Holler for Help" to the Memphis soul Stew of "Behind That Smile" replete with his own version of the Raylettes performing background vocals. Ellison espouses his "My Little Sheba" like a dirty joke between friends while "Jesus Loves Me" screams high mercy for his blues sins.

Ellison is not without a sense of humor. "Fishsticks and Jelly" makes me wonder if Ellison did not do some time in an Oklahoma Catholic school, where the nuns would have damn sure taught him the meaning of the blues. This is his acoustic offering, overlaid with a tasty electric slide guitar that recalls the Rolling Stones' arrangement of Mississippi Fred McDowall's "You Gotta Move" from Sticky Fingers (Rolling Stones, 1971). Pound for pound, Ellison brings the blues funk to the forefront, playing a varied antipasti of our indigenous music.

Holler for Help; Arlene’ Behind that Smile; Fishsticks and Jelly; elevator Man; Jesus Loves Me (Baby Why don’t You?); School Girl; Put You Down; Hit it, Get it and Go; Wear Out Your Welcome; I Thought I’s Be Gone; My Little Sheba; She’s on My Trail.