BY FRIEDRICH KUNZMANN
December 6, 2020
Sign in to view read count 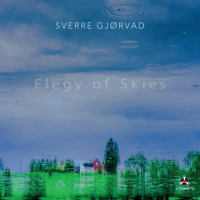 Sverre Gjørvad's 2019 offering Voi River (Losen Records) saw the Norwegian drummer painting minimalist sketches that mirrored his native environment. Taking up that thematic thread, his follow up effort opts for the gaze upward, reflecting on Norway's firmament in a musical Elegy of Skies. As compared to the predecessor, Gjørvad's 2020 sketchbook of ideas is even more melodically concise, conceptually stringent and technically refined. It sees him in expressive and sensitive interplay with a quartet that always seems to know exactly where the leader wants to go. The drummer's modest yet melodically determined presence combined with Kristian Svalestad Olstad's sonically experimental guitar work call Paul Motian's pioneering trio featuring Bill Frisell and Joe Lovano to mind on several occasions throughout the set—especially when joined by Joakim Milder on the saxophonist's sole guest appearance of the album.

The record only really starts to take off with the title track, succeeding a long rubato exercise of crashing cymbals and sustained double bass bowing going hand-in-hand with guitar swells on the meditative opener "An Amorphic Balloon." A breezy quality to the music seems to contradict its dense conversational constitution. Chimes ring long after they're put to action and picked up by hovering guitar sustains, similar in tone—the guitar being something like the epicenter of most arrangements. In equal parts melodic leaders and sources of ambient soundscapes, Olstad's strings reverberate in a nimble fashion, subtly filling in the space around equally dynamic cymbal hisses. Melody-driven "Rein" and the atmospheric title track demonstrate the guitar's versatile range thoroughly— seeing Olstad relying on horizontal lines in the former and drone-like delays in the latter composition.

Like the juxtaposition between melody and atmosphere, simplicity and intricacy revel in a symbiotic relationship. Take the childishly unpretentious two-note motif heading "Fire" for example. Sequenced through different scale degrees, the interval of a fifth is played in an almost ridiculing unison by all instruments but the drums, which in return are left to roam free. The piece is subsequently opened up by introduction of gentler melodies traded between tremolo sparks on guitar and reserved piano runs. Depth lies in the spontaneous improvisatory manner with which the musicians listen and appropriately respond to each other.

Little traditionalism lies in the dreamy "The Wife Waltzes Too," except for it being counted in three, while "strive" brings march-like snare rolls into play that clash with eerie guitar electronics and syncopated downward motion on piano and guitar, before double bass arco takes over. "Mercy"'s folksy sway would be a highlight on any record, combining acoustic guitar strums with a warm pump organ layering to the melancholy only a tenor sax could evoke. Milder, who famously features on pianist Marcin Wasilewski's trio date for ECM Spark Of Life (2013), adds warmth and color to the composition, written by English 80s' pop act Prefab Sprout's Paddy McAloon.

There's a lot of detailed interplay and sonic intricacy in this music and the same amount of memorable melodies. But more than anything else, Elegy of Skies sees a gifted composer bringing a handful of great compositions to a well attuned band who make them their own. Without comprehensively drawing on his inspirators, Gjørvad has crafted a special jazz recording that, with its timeless appeal, belongs among the year's finest.