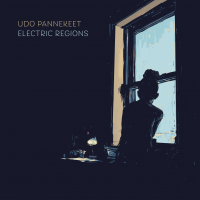 Udo Pannekeet is the current bassist for the legendary Dutch progressive rock band Focus, featuring original members Thijs van Leer (flute, vocals, keyboards) and Pierre van der Linden (drums). On this album the bassist goes for the gusto, supported by an extensive lineup, where jazz rock, fusion and modern jazz concepts co-align, most noticeably on the opening and adrenaline-charged long-form composition "Electric Regions Part One," which is basically the album's tour de force.

Drummer Marcel Serierse kicks off "Electric Regions Part One" with a snappy beat, accented by his ringing snare drum and underscored by the leader's melodic, yet impacting lines. With ascending horn choruses, whispery flute lines and simmering developments, the ensemble builds upon layers amid a soaring swing vamp and alternating themes, complete with Pannekeet's mystical voice overlays. They also cast semblances of a dark, faraway place, complemented by one of the five listed guitarist's shady volume control effects and the soloists' sonorous phrasings. It's akin to a multipart suite as Pannekeet's vision also includes Afro-Cuban pulses, rowdy blues rock motifs, synth-laden melodies and up-tempo percussion grooves. Essentially, the musicians sustain a high-level of interest via this busy but productive oeuvre that steamrolls ahead with capricious flows and an anthem-like closeout.

Title: Electric Regions | Year Released: 2019 | Record Label: In and out of Focus Records