By DAN BILAWSKY
January 4, 2013
Sign in to view read count 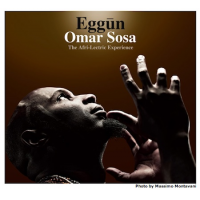 A tribute to trumpet legend Miles Davis' Kind Of Blue (Columbia, 1959), without a single song from the record? The answer: an emphatic "Yes!" In 2009, piano wizard Omar Sosa received a commission from the Barcelona Jazz Festival to "compose and produce a tribute performance to Miles Davis' classic recording, Kind Of Blue, on the occasion of its 50th anniversary." The keyword there is "tribute"; not "facsimile" or "rewrite." Even if they had asked Sosa for such a thing, they would have been unlikely to get it from such an original player. His Davis-like reputation as an uncompromising artist who does his own thing, regardless of trends, made him the perfect choice for such a project and he didn't—and doesn't—disappoint. It took a few years for the music to get recorded and make it to the marketplace, but it's here now and it's stunning.

Joan Cararach, the director the Barcelona Jazz Festival, makes note of the fact that this music "derives from the melodic cells of Kind Of Blue's solos," and notes that the brief interludes connect to pianist Bill Evans' work, but that may or may not be so important. Something so obviously grown from "Flamenco Sketches" might be detected in Sosa's music—or the "So What," "All Blues," and "Freddie Freeloader" references of "So All Freddie"—or perhaps they won't. What's wonderful about this recording is that it's open to interpretation by the individual and it captures the spirit, if not the musical essence, of Davis.

While Sosa breaks the record up into fifteen tracks, it plays out best as one long-form work. His skills as a sonic architect shine through here. On his previous recordings, the solo Calma (Ota, 2011) and duo Alma (Ota, 2012), Sosa was the focal point, but on this record, his role is different. He still acts as a pianistic conjurer of spirits, but his big-picture job as puppet master and constructionist is of greater importance in the grand scheme of things.

ADVERTISEMENT
When working with a pan-global ensemble of eleven, it's important to consider the road map and Sosa does more than that; he writes it. Some things remain fairly consistent and present, like Childo Tomas' bubbly bass and Joo Kraus' cut-to-the-heart, Davis-esque trumpet, but other parts come and go. Percussion is an important and near-constant element at play, as on all of Sosa's larger works, but with three percussionists and a drummer mixing things up, it never sounds the same from moment to moment or track to track. Leandro Saint-Hill and woodwind antiquarian Peter Apfelbaum both deserve high praise, proving to both be valuable design elements, as they cover everything from flute to bass saxophone between them.

Eggun, like most of Sosa's records, is more of an experience than an album, so sit back, light some candles, as Sosa himself would likely do, and let the music take you away.