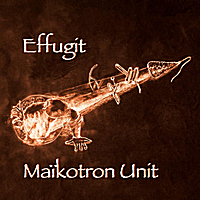 The maïkotron, invented by multi-instrumentalist Michel Côté, is a woodwind instrument played with the reed and mouthpiece of a saxophone and is made up of trumpet valves, the bell of a cornet and parts of a clarinet and euphonium. The unusual makeup is not only an indicator of Côté's resourcefulness, but of the trio itself, which uses the name as the canopy for its wide range of sounds and style.

The three have been together since 1984 and, in that time, they have developed not only an artistic kinship, but a kinetic synergy that is transported into their improvisations with startlingly effective results.

Interaction is paramount, and comes in the turn of a phrase or the advent of a note. Form gives rise to fragment before it is made whole again. All three are multi-instrumentalists who make inspired choices of instruments that key into their imaginations and elevate the music. In molding form, they bring into play different parameters to shape the contours of a composition.

The aesthetic comes to the fore right from the time they launch "Liberum" with an introspective interaction between reeds, drums and arco that gradually coalesces and begins to swing deftly. The mood has changed, but the allure of the first note stays until the last floats into silence.

The trio does not take long to make a statement, with the tracks running between two and five minutes. The one time they really stretch out is when they go past seven minutes on "Sawah." The gentle strains of this Indonesian inspired melody are set in motion by Michel Côté, whose piccolo curls in the air at first with a recognizable body before it splits into free sonority. Pierre Côté pegs it down in the rich ambience of his bowing on the bass and then assimilates his lines with that of the piccolo, bringing in a classical air which Michel Lambert's stokes accent and aid the movement. It's a beautifully enunciated tune that is substantiated as much by form as by free flow.

"Paradoxe" is a whirling assimilation of sounds manifested in the rumble of bass, the darting of the maïkotron and the linearity of the clarinet until a melodic chord reflects the balance of their attributes. Put all the music together and this becomes a breathtaking piece of work.