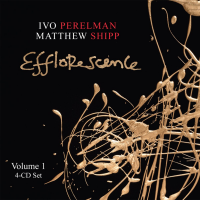 Charles Darwin (1809—1882) might have set in motion, with his Theory of Biological Evolution, the idea that we humans are related to apes, but it was the later explorations into DNA and genetics that proves our basic structures are but a few variations from all other lifeforms on earth. What, you make ask, does this have to do with the duo of Ivo Perelman and Matthew Shipp? Plenty. Please allow a bit of hyperbole here. Let us imagine we are applying for a grant to study the correlations between Perelman's saxophone sounds and that of cetaceans, the aquatic mammals we call whales.

Whales were swimming in Earth's oceans millions of years before there were such things as Homo Sapiens. They share a rich culture and a unique language, just as Perelman and Matthew Shipp. This 4-CD release, their eighth duo release, is further evidence of a mother tongue that could be explored with the same rigor marine biologists study whale songs. The musicians' relationship is also an ancient one in terms of jazz collaborations, having first recorded together back in 1996 on Bendito Of Santa Cruz (Cadence Jazz Records). You might have heard, listening to his early work, that Perelman's sound developed from the Albert Ayler school. It certainly did, but with each release—and one could argue, his affiliation with an original voice like Shipp's—he developed his own language. Since his early explorations into the depths of bottom notes, the saxophonist swims now in altissimo, the uppermost register strata.

Perelman publicly stated—and fans believed—the five star 3-CD Oneness (Leo Records, 2018) was this duo's ultimate statement. But like Shipp's perpetual retirement declarations, followed by a musical recantation, the pair was back in the studio recording a reported 97 duets in May 2018. Efflorescence: Volume 1 contains 49 duets, and Volume 2 (which will follow soon) the remaining 48. More data for marine/musical biologists (read: us listeners) to investigate. We take pleasure in this music—O.K., let's say "study," because it follows none of the infrastructure of jazz. No standards are played, and familiar chord progressions and time signatures are avoided. But this is not free improvisation. Like whale songs which biologists have yet to translate, this music is a language, with its own vocabulary, dialect, argot, and turns of phrase. We listeners act as deep sea divers, eavesdropping on two giants. Like whale songs, the sounds may be quite new to some. Perelman verbalizes by way of whispers, cries, and blasts, none of which is in isolation. He is always responding to Shipp's notes. For his part, Shipp is a force of nature, immersed in the seas in which Perelman swims. Just as a whale might have different vocalization in turbulent water, the saxophonist reacts to Shipp's dense chords and also his pacific passages.

What are they saying? We don't know exactly what language Perelman and our whale friends are speaking. We do know that it gives the impression of the eternal. Maybe some day we will crack the code. Until then just enjoy the beautiful conversation.