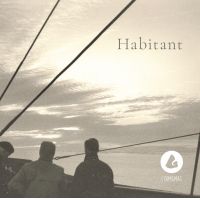 L'Oumigmag's Habitant is an ambitious reimagining of traditional Quebecois folk, based on the environment and natural beauty of the area around the St. Lawrence River. It has a feeling of comfort that is often reminiscent of a friendly bluegrass jam.

Habitant is a reference to the first French settlers of the St. Lawrence River. The record is a tribute to them, not only with a primarily acoustic sound but with a great sense of adventure. The adventure is in the rhythms here, with two percussionists, Tom Jacques and Olivier Bernatchez, using both conventional drum set and shakers to create layers of sound. Bandleader l'Oumigmag is a student of swiss Zen-Funk creator Nik Bärtsch, and Bartsch's influence is felt in how Sauvageau plays with meters and the slow development of melodic and rhythmic themes. Sauvageau's peaks-and-valleys approach to songwriting keeps things engaging throughout, as no section overstays its welcome or feels overly self-indulgent. L'Oumigmag achieves something rare for most bands; it is often difficult to tell which parts are through-composed and which parts are improvised because of how free the soloists sound and how the music flows between sections.

David Simard's fiddle is a star on this record; the melodies take advantage of the subtleties in phrasing that are possible with a fretless bowed instrument. His use of podorythmie, a French-Canadian technique of tapping one's feet during a performance, adds both an increased sense of history and rhythmic interest. The sense of humor present in moments such as the trading melodies in the middle of "Fléché," followed by squealing saxophone notes from Alex Dodier, shows that these musicians had fun making this record, which makes for an enjoyable listening experience.

The intimacy of "L'estran," a solo guitar piece for Sauvageau, sticks out in an album with many complex arrangements, creating an arresting stop after a period of great action. It has the feeling of a friend pulling you aside after a crowded party and opening up to you with honesty and sincerity. Here is Sauvangeau naked, every breath and squeak of his fingers gliding across his guitar can be heard during a six-minute soliloquy.

L'Oumigmag captures the sound of the trees and water that the first Habitant's lived in. Though the almost ineffable qualities of nature are hard to capture, L'Oumigmag, through the use of primarily acoustic textures and the playful rhythmic patterns, express the organic variations within the natural world. Habitant uses old standards to make the passage of time go from the world of the abstract to the physical world, drawing a line from those first settlers to the people who live in Quebec today. A stunning achievement.