BY AAJ STAFF
September 5, 2005
Sign in to view read count 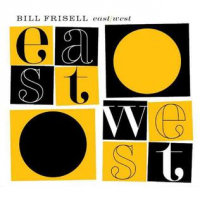 Though he's passed through several phases during the last two decades, guitarist Bill Frisell has manifested an uncanny ability to transport listeners across gaps in time, space, and style. His jump-cut playing with Naked City did this in a blunt and abrupt fashion; recordings from his country-tinged period tugged at the very roots of American string music; and his 2003 Nonesuch recording, The Intercontinentals, leapt boldly across international boundaries.

In a similar fashion, the double live set East/West, assembled from recent dates in New York and Oakland, respectively, is a flying carpet all its own. But what is striking is how very effectively the recording accomplishes this feat, given its extended duration and the fact that these sixteen pieces were spliced together from several days' worth of live performances. If nothing else, you have to credit Frisell with consistency—an attribute that also applies to his trio mates, Kenny Wollesen (drums), Tony Scherr (bass on East), and Viktor Krauss (bass on West).

This music displays several uncommon characteristics: it conveys a deep respect for memory, both musical and cultural; it's somewhat pastoral and imbued with a related organic fertility; and it's saturated with resonant tones. Whether the backbeat or the downbeat takes the pole position depends on whether a given piece may be based in rock/blues/country or jazz (almost all the former). Frisell definitely has an ear for dissonance, but he mostly prefers to use it as a spice, rather than a main ingredient.

The West disc has the most coherent flow. It gets off to a comfortably familiar start with "I Heard It Through the Grapevine," then digs deep into driving, rocking blues on the next piece. So far, so good, so American... but then a six-minute slice of mutated West African blues shows up in the form of "Boubacar" just down the road. This ultra-resonant piece works the backbeat in a much more relaxed, meditative fashion.

The ten pieces on East are more fragmentary, though they have their own high points. A timbrally clean take on "The Days of Wine and Roses" takes a little while to get into its groove, but once the rhythm section kicks in, everything starts swinging nicely. Frisell's relatively short phrases have a conversational aspect, making use of irregular spacing and occasional dissonance. The bright fourteen-minute original "Ron Carter" has some nice give-and-take counterpoint. The one and only real low point is the annoying but mercifully brief "Tennessee Flat Top Box," which takes finger-snapping bluegrass straight into a black hole of noise to wrap the disc up.

Depending on your tastes, especially with respect to loops and effects, the backbeat, blues, and country, you'll get more out of some of these pieces than others. But taken as a whole, this is a creative and consistent collection that begs repeated listens and stands with the very best of Frisell's recorded work.

Note: Eleven additional tracks from these live performances are scheduled to be made available as downloads in November, 2005.