BY DAN MCCLENAGHAN
November 21, 2008
Sign in to view read count 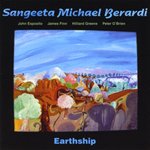 There's a lot of talent vying for our ears in jazz, which translates to many top rate artists falling into the underappreciated category. Guitarist Sangeeta Michael Berardi (b. Sept. 2, 1939, in Waterbury, Conn.) is one of those singular musicians who hasn't gotten his due.

Berardi, who was primarily based in Woodstock, N.Y. during his most productive years, has worked with Archie Shepp, Joe Diorio, Sonny Simmons, Perry Robinson and Roswell Rudd—something of a who's who in the avant-garde genre.

Earthship was recorded in 1996 in Woodstock. The disc was released on a limited basis—what might be called a bootleg—in 2007. It has now been officially released on pianist John Esposito's Sunjump Records.

Berardi's guitar is a soaring, swooping, melodious jet turbine of an instrument, owing as much perhaps to Jimi Hendrix as to any jazz guitarist. The atmosphere of Earthship is one of deep spirituality, much like John Coltrane during the saxophonist's Impulse! Records years.

Berardi is joined here by John Esposito on piano and multi-reed player James Finn, along with Hilliard Greene on bass and Peter O'Brien on drums. The group opens with the monumental, Coltrane-esque title tune, a searing fire-in-the-belly fourteen minutes of song. The tune throbs in on a meditative groove, but soon enough everybody's wailing—Finn on tenor sax, Esposito, and especially Berardi, backing Finn with ice crystal chords beside Esposito's dense, McCoy Tyner-like sound. And when Berardi takes his solo, it's as if he is diving in from the stratosphere.

"Trane's Church" has that same warp drive sound, but in a trio setting—turbulent drums and scorching guitar licks bookended by some Art Ensemble of Chicago-like bells. "Six for Rashied" explores more of the Coltrane Impulse! sound, with James Finn's tenor sax reaching for outer space.

"My Favorite Things" (the Rodgers and Hammerstein classic that was redefined by Coltrane) gets another redefinition here, with Berardi bringing a radioactive shimmer of brash spirituality to the tune—an American songbook jewel soaring toward Nirvana.

It's a shame there is so little of Sangeeta Michael Berardi's music available on CD. The release of the excellent—from start to finish—Earthship is a step towards introducing his singular sound to the audience he deserves.