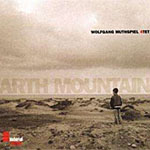 A guitarist who moves at a pace through a variety of styles, from ambient, fusion, straight-ahead and post-rock to experimental jazz, Wolfgang Muthspiel sometimes returns to his projects, typically with a twist.

Earth Mountain is another welcome revisit. Anyone who enjoyed Muthspiel's gorgeous straight-ahead outing with the young bass and drums team of Matthias and Andreas Pilcher, Bright Side (Material Records, 2006), will have been waiting for a follow-up. And here it is, the trio augmented by the Swiss pianist Jean-Paul Brodbeck and with writing and arrangements which, while still rooted in the Bright Side groove, this time, particularly in their rhythms, pay more than a passing nod to hip hop and rock.

A strong addition to the line-up, Brodbeck is a lyrical and virtuosic player who shares Muthspiel's early grounding in classical music; his Song Of Tchaikovsky (Unit, 2007) was an improvisation-based spin on the Russian composer's legacy. He brings an empathetic new voice to the group and—happily, some will feel—allows Muthspiel to put aside the loops and samples which have taken the place of a second chord-playing instrument in much of his music, to focus instead on real-time, in-the-moment guitar.

Bright Side was characterized by pretty ballads and cascading melodicism, and those qualities are retained on four of Earth Mountain's nine tracks—Brodbeck's "Elegy" and Muthspiel's "East," "Steps" and "Mupemo," the last a sprightly, Pat Metheny-esque tune which develops more astringent colouring as it progresses. Elsewhere the rhythms and textures are rougher. "Jackson's Pocket, " "Radiohead" and "Earth Mountain" owe almost as much to hip hop and rock as they do to jazz, and Muthspiel rides the beats with vigor. "Sistah" and "What Stays" are more moderately paced, but the power chords and tone distortions remain.

The Pilcher brothers, awesome on Bright Side, are approaching force-of-nature stature. Muthspiel gives them room to shine, both in the arrangements and as soloists, and their in the groove but no slave to it rhythms are key to the music's success. Both are excellently recorded—Muthspiel's production values on his Material Records releases are generally outstanding—and Matthias' fat, singing tone is a joy (his reading of the closing "Steps" theme lingers a long time in the mind).

Along with Phil Robson's Six Strings And The Beat (Babel, 2008), Earth Mountain is co-leader so far in the European guitar album of 2008 stakes, and then some.

In addition to his editorial duties at All About Jazz, Chris is also editor of the British style and culture magazine Jocks&Nerds.