Maximize your visibility at All About Jazz by upgrading your musician page from standard to premium. With it, you'll receive All About Jazz home page exposure, a highly stylized / ad-free musician page with bonus features and benefits, an ad, plus you control where you sell your music and so much more.
Learn More
476

BY JOHN KELMAN
September 30, 2008
Sign in to view read count 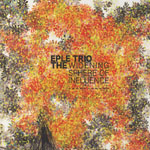 If there's a singular specific approach that Scandinavian musicians have brought to jazz, it's a temporal elasticity where time is often fluid, whether or not it's clearly defined. While rubato playing is nothing new, it's become a trademark through the playing of pianists like Bobo Stenson, Tord Gustavsen...and now, Andreas Ulvo and Eple Trio. As different as it is from Maria Kannegaard's Camel Walk (Jazzland, 2008) and Stenson's Cantando (ECM, 2008), Eple Trio shares the exploration of space, understatement and slow tempos. But as keyboardist for the more progressive rock-inflected Shining, Ulvo may approach silence rather than ear-shattering extremes on The Widening Sphere of Influence, but he also demonstrates the occasional predilection for greater energy.

Still, there are parts of The Widening Sphere of Influence where the trio leaves notes to decay for so long as to approach periods of near-silence while, at the same time, creating a remarkable feeling of impending drama. "March of the Mystery Men" builds inexorably, Ulvo inside the piano while bassist Sigurd Hole creates the most delicate pedal point and drummer Jonas Hodwn Sjovaag layers seemingly random colors. A brooding, neoclassical theme emerges, building repetitively with Hole taking on a more dominant role that draws comparison to e.s.t.'s Dan Berglund and that trio's Leucocyte (ACT, 2008), with the trio becoming gradually more intense, dense and electronic, only to dissolve back into ethereal darkness.

While collective improvisation factors large here, it's of a nuanced nature with influences that come more from the classical sphere—traces of Arvo Part, Erik Satie and Debussy can be heard throughout— as well as the ubiquitous alt-rock presence of Radiohead (even though the disc is largely acoustic). Ulvo also cites pianist Misha Alperin as a reference, and in his largely tranquil approach with the occasional unexpected vibrant outburst, it's a clear line to albums like Her First Dance (ECM, 2008). It's a modernistic blend that combines tranquility with dark-hued, out-of-time passages of subtle grandeur, "River Song" feeling much as if Satie were an improvising pianist, with its spare theme a rallying point for trio interaction that's unfettered yet still revolving around the song's base structure.

Another example of how Norwegian artists are stretching the boundaries of the traditional piano trio past its breaking point into completely new territory, The Widening Sphere of Influence is an appropriate title for Eple Trio's imaginative musical expansionism. Whether it's the delicately atmospheric, image-inducing "Buoy" or more majestic "River Song," which bookend the disc with related motifs, Eple Trio's blend of serenity and occasional bursts of jagged intensity make for a unique and consistently compelling listen.