The Giving Shapes: Earth Leaps Up 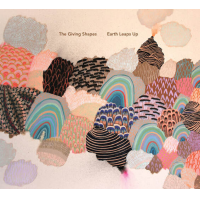 Two years and ten releases after Elsewhere was inaugurated, some of the label's aficionados may have thought they knew what to expect next. If that were the case, a few people could be surprised when they hear Earth Leaps Up for the first time. Formed at the Banff Centre for the Arts, in 2017, The Giving Shapes is a collaboration between harpist and vocalist Elisa Thorn and pianist and vocalist Robyn Jacob, who met in 2007 while they were each studying for a degree in classical music at the University of British Columbia. (So, this album is another release by Canadians, in the aftermath of Another Timbre's Canadian Composers Series.)

Despite their classical music degrees, the music made by The Giving Shapes is neither classical nor contemporary composition. Instead, Earth Leaps Up comprises nine songs, composed by The Giving Shapes, ranging in length from three-minutes-and-twenty-seconds to just over six minutes, forty-one minutes altogether. Throughout, Jacob and Thorn accompany themselves on piano and harp, both of them also singing.

Their voices are pure and true, hitting every note and harmonising together effortlessly, without any of the hallmarks of classically-trained voices—rolled r's and suchlike—nor (ignoring some wordless harmonising at the end of the title track) the scatting habits of jazz singers nor the power and volume of rockers. Partly, the latter is because the songs do not deal with such rock topics as love, loss or jealousy, so no upswells of emotion need to be conveyed; the two are far more adept at communicating subtler emotions; song titles such as "Gravity," "Sightlines" and "Tesselate" give a feel for the territory the lyrics cover, "Tesselate" concluding with a call-and-response between the pair singing the words "intuition," "basic rhythm" and "tessellation."

Perfectly complementing the vocals, the piano and harp complete a rich soundscape which belies the fact that there are only two players involved. The playing goes way beyond being accompaniment, as the pair add intricate fills and filigree details throughout. Altogether, all four elements fit together ideally, so that nothing seems lacking and any addition would be gilding the lily. Although The Giving Shapes cite influences including Nico Muhly, Bjork, Radiohead's Jonny Greenwood and Bang on a Can's David Lang, none of those gives a potential listener any idea of what they should expect from the duo's music. Although the music is easy on the ear throughout, in no way is it easy listening or wallpaper music, being far more interesting and innovative than those labels suggest.

Interestingly, each of the pair cites the influence of the other on the music. Thorn: "Robyn is an endless inspiration to me in all the things that she does"; Jacob: "I like Elisa's integrity and devotion to her artwork, and her attitude in general as a musician and an artist. Also, it is a privilege to be able to make art with one of your best friends." Altogether, it sounds as if we shall be hearing plenty more from The Giving Shapes in the coming years. Good news.