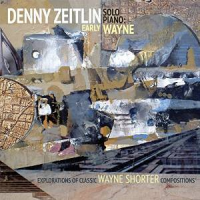 Early Wayne has many things going for it: it is a well recorded, live concert; pianist Denny Zeitlin, who has been recording for over fifty years, is masterful to the point of completely taking over the listening space, and, last but not least, the material used as the base for his improvisation is a set of ten Wayne Shorter tunes, mostly from the mid-60s.

The list of tunes, and the albums from which they come is below; the albums by Miles Davis were made by his second (great) quintet which included Shorter, Herbie Hancock, Ron Carter and Tony Williams:

For many jazz fans, the Davis/Shorter nexus practically defines the music called "post-bop" and belongs to the "golden era" which began with "be-bop," then "hard-bop" and finally "post-bop."

In any case, most of the tunes have title recognition, if not melodic recognition, by which it is meant that most could not "hum" the tune, but could name it when it is played on the album. Shorter tunes are like that because of the way the melodies are constructed and how the lush harmonies and rhythm interact with it. The music is immediately recognizable in its entirety as "Shorter," but the details are for the most part ingeniously hidden under "the sound."

The Piedmont Piano Company offers an annual performance in their own space to an audience that appreciates the music. Zeitlin took the opportunity to do a "Shorter set" and obviously learned this music and these tunes inside and out. His improvisations, most six minutes or longer, are more like excursions or ruminations, and end up washing over the listener in their vastness.

Yes, a melodic fragment can be recognized (say, that of "Infant Eyes") here and there, but not recognizing the "ur text" in no way diminishes the depth, richness and sheer improvisatory invention of Zeitlin's playing. Each piece has it own mixture of that which has the sound of preparation with that of on-the-spot creation; this makes the album an exciting experience.

Anyone who is unfamiliar with sixties Shorter should definitely look into the Blue Note and Columbia catalogs of this period and deeply imbibe in Shorter and Davis.

The sheer pianistic virtuosity and high musicianship of Zeitlin makes Early Wayne a delightful gem and many times a mesmerizing experience.