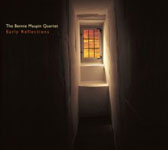 After establishing his reputation in the 1960s and 1970s with artists including Miles Davis, Andrew Hill and Herbie Hancock, Bennie Maupin mysteriously disappeared for over a decade. Re-emerging in the 1990s, it's still only been recently—with the release of the overdue reissue of his 1974 ECM classic, The Jewel in the Lotus in 2007, and his first album as a leader in eight years, the sublime Penumbra (Cryptogramophone, 2006)—that the woodwind multi-instrumentalist has returned to greater visibility. Early Reflections's instrumentation may be a more conventional setting than Penumbra's woodwinds/bass/drums/percussion line-up, but it's just as fine, its generally subdued tone broken by occasional bursts of fiery intensity.

Like Polish trumpeter Tomasz Stanko—who nurtured a young Polish piano trio that has supported him since Soul of Things (ECM, 2000) but has also built its own independent reputation with Trio (ECM, 2005)—Maupin has "discovered" an equally fine trio of Polish musicians in pianist Michael Tokaj, bassist Michal Baranski and drummer Kukasz Zyta.

Like Stanko's find, Maupin's group demonstrates elegant simplicity on the balladic "Inner Sky" and delicately propulsive "Atma." The latter is one of two to feature Hania Chowaniec-Rybka—a singer who, despite this being her first improvisational album away from classical and Tatras folk roots, melds beautifully with Maupin's soprano sax, and with his alto flute on the dark-hued closer, "Spirits of the Tatras." Her improvisational prowess during the extended free opening to "Spirits of the Tatras" transcends conventional scatting with the same kind of timbral explorations as innovators including Meredith Monk and Sidsel Endresen. But while its intro is more vibrant in tone, it ultimately morphs into a brooding ballad feature for the impressionistic Tokaj.

Solo space abounds on the softly Latin-esque "Escondido," a feature for Maupin's signature bass clarinet; the hauntingly beautiful "Tears," with Maupin again on alto flute; the in-and-out-of-time ballad "Inner Sky"; and a more rhythmically defined waltz-time retake of The Jewel in the Lotus' title track that, beginning in simmering subtlety, turns into a burning modal workout for Tokaj and Maupin's most powerful solos of the set.

Breaking up the extended tracks are four miniature collective improvisations that bear a surprising sense of construction. The opening "In Reach," in particular, demonstrates the kind of deep interaction normally only heard from groups with considerably more than the two years this group has under its belt.

Recent years have seen a resurgence of interest in artists who first made their name in decades past. It's only been in the past decade that Tomasz Stanko and Enrico Rava have achieved the international visibility they've always deserved, and Maupin can now be added to that list, thanks to Cryptogramophone. Penumbra and the equally outstanding Early Reflections book-end The Jewel in the Lotus—a promise Maupin never managed to follow up—demonstrating two very different sides and making it clear that he's truly back and better than ever.

Within Reach; Escondido; Inside the Shadows; ATMA; Ours Again; The Jewel in the Lotus; Black Ice; Tears; Not Later Than Now; Early Reflections; Inner Sky; Prophet's Motifs; Spirits of the Tatras.