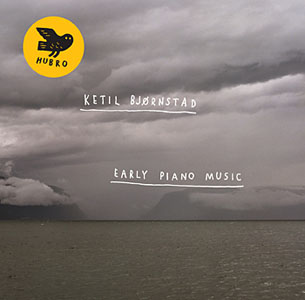 For a label that's been instrumental in reinventing the concept of solo piano performance, it's surprising that ECM has never released a recital from Ketil Bjørnstad. Instead, they've provided a forum for the Norwegian neo-classicist to experiment in contexts ranging from the duos of Life in Leipzig Night Song to the trio of Remembrance, and the expansive sextet on the forthcoming Antonioni Project, recorded in performance at Molde Jazz 2010. But long before he began achieving international prominence with ECM, starting with 1993's Water Stories, Bjørnstad had established a name for himself at home, with albums dating back to Apnig (Philips, 1973), novels including Nattsvermere (1974), and poetry collections like Alene out (1972).

But it wasn't until the mid-1980s that the pianist decided to pare back the ambitious productions of his early recordings and, as he states in the liners to Early Piano Music, rediscover "the pleasure of exploring the grand piano." Recorded in two sessions at Oslo's Rainbow Studio, known for its many ECM recordings, and last available in reissues on the Hermitage label as Preludes (1993) and Pianology (1994), Early Piano Music thankfully returns both sets to print, providing a window into the pianist's early distillations, bringing the music to its simplest, most direct essence. It's also a chance to hear germinal versions of music that would ultimately appear on his breakthrough 1995 ECM recording, The Sea.

If ever there was a set of music that represented a love song to the beauty, subtle nuances and orchestral grandeur of the grand piano, it's Early Piano Music. The 21 preludes on the first disc find Bjørnstad at his reductionist best: simple songs, on the surface, but imbued with a depth not unlike Erik Satie, who seems to be a direct source for the gentle waltz of "Prelude 1," though the French composer never imbued his music with some of the blue notes Bjørnstad does. Bjørnstad's greatest strength is his commitment to letting simple melodies speak for themselves, playing more with delicate phrasing than overt embellishment. With only two preludes in this 1984 recording breaking five minutes, these miniatures are effectively self-contained, readymade grist for larger interpretation, except that in keeping with such an unadorned approach, Bjørnstad knows a simple truth: the core of any good song must be able to stand on its own, as these do.

Three of the tracks on the second disc, recorded in 1987, are considerably longer and reflect an evolving approach. "Pianology 1" seems based around a simple left-hand vamp, until Bjørnstad reveals its melancholy, singsong form nearly three minutes in. Briefer exercises, like "Pianology 3" and "4" stay closer to form, and hearing these tunes nearly thirty years later, if Brian Eno's brother hadn't heard Bjørnstad when he recorded Voices (EG, 1985) and Between Tides (Opal, 1986), then it's clearly a case of magical synchronicity.

Bjørnstad has since expanded this more minimalist idiom, giving it a stronger improvisational quotient. But for 110 minutes of calming, meditative music filled with simple but unfailingly memorable melodies, Hubro's decision to bring Bjørnstad's lovely Early Piano Music back into print is a most welcome one.