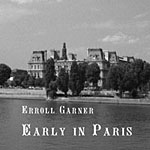 Erroll Garner was one of the savants of jazz who helped define the sound and style of his instrument without ever learning to read music. His brilliance rested in a unique ear, from which he developed a personal and indisputably beautiful approach to the piano that spun beautiful, romantic statements and spontaneous adventures from his own tunes and the songs of the American Songbook. It is telling, that in a modern jazz world dominated by virtuosi, Garner remains as unduplicated and as enjoyable as ever.

A recording like Early in Paris offers rare insight into the development of a brilliant player for whom music seemed like second nature. The release consists of selected radio recordings from the beginning of Garner's career in the late 1940s, and reveals a young genius testing his limits as a solo pianist within the structure of standards. Of course, it's also quite pretty. Regardless of what was to come from Garner, the material here provides an easy listen that epitomizes the sweet swing and technique of classic jazz piano.

But fans in search of insight will find much to love and a few curiosities. Over the course of the 13-song set, the young Garner shows a rich vocabulary drawing on heavy swinging stride, along with hints of bebop and touches of classical. The cascading flourishes and guitar-like left hand accompaniments that epitomized Garner's style are fully formed here. Ballads like "Tenderly" and "Someone to Watch Over Me" sound as classic as ever, rising up and crashing like seaside waves. What's particularly interesting is that Garner doesn't just mix in a number of styles over the set, but toys with the melodies of the songs themselves, playing them perhaps not as they were written but as he heard or wanted to hear them.

This leads to a few eye-raising twists within tunes such as "Georgia On My Mind" and "These Foolish Things," but also to ingenious and seemingly spontaneous gems that emerge from their structures. Garner blurs the line between the traditional head-improv-head approach to jazz tunes. His introduction to "St. Louis Blues" starts off curiously but opens up the tune into something truly original.

At least some of the tracks here have been released before over multivolume compilations, but their release on Blue Music Group makes them sound about as good as it seems they could. Considering that the recordings originally aired live on radio, the sound quality is superb. The experience of listening to them is nostalgic, tinged with sweet smoke rings from a black and white Paris captured on the cover. With song selections such as "St. Louis," "Georgia," "My Old Kentucky House," and "I'm Coming Virginia," one can't help but wonder if Garner was missing home. If so, he poured his feelings through the piano.

Early in Paris; Tenderly; Someone to Watch Over Me; What Is This Thing Called Love?; Take the A Train; Georgia On My Mind; Sloe Gin Fizz; St. Louis Blues; My Old Kentucky House; These Foolish Things; Lover Man; I'm Coming Virginia; Erroll's Peril.