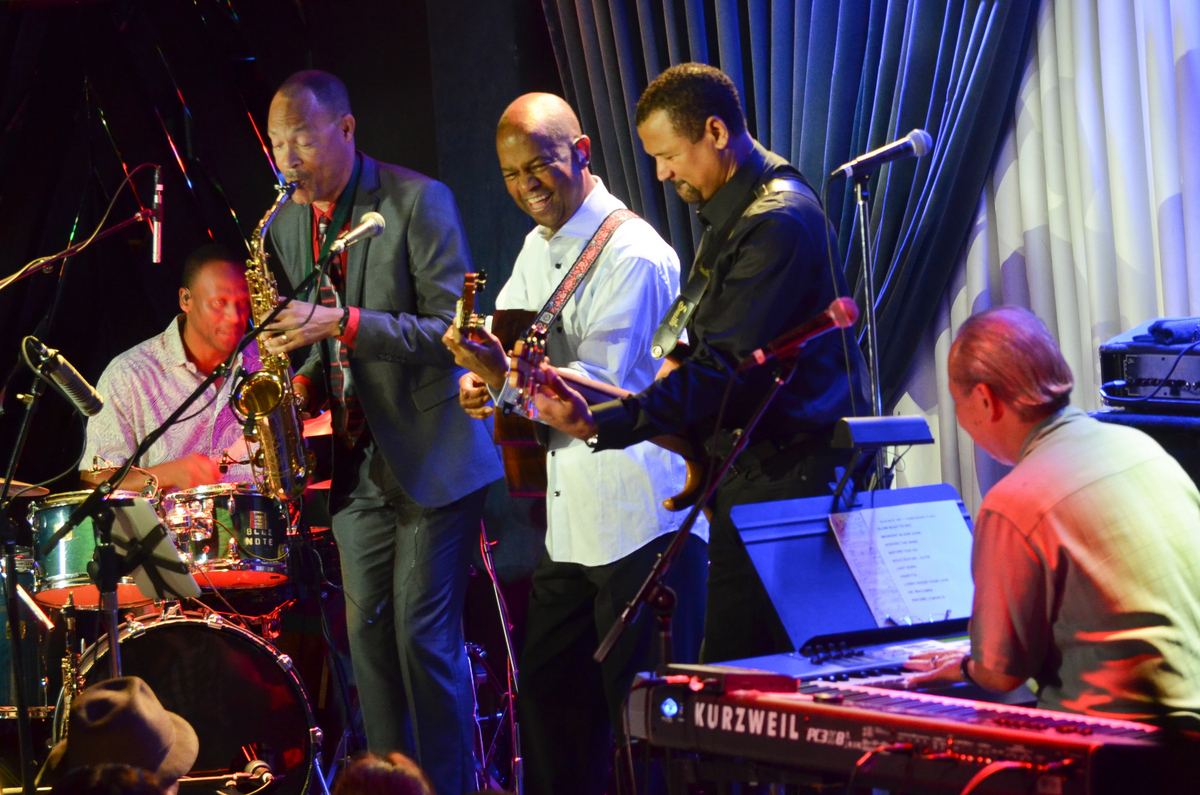 On a pleasant, Thursday evening in mid-August, Grammy Award-winning guitarist Earl Klugh treated the packed and very enthusiastic audience at New York City's Blue Note Jazz Club to a spectacular night of silky smooth jazz. The slightly muggy venue was packed, but not overcrowded. The anticipation was high as Klugh and his quartet started his show (the first of two separately scheduled sets) promptly at 8pm.

Klugh and his band immediately warmed up the crowd and created a perfect mood with the Latin-influenced "Slow Boat To Rio." At the end of that selection, the legendary jazzman said, "Thank you so much for coming out. We really enjoy it here at the Blue Note. You never know who will stop by. We'd like to keep with the Latin vibe. This one's called 'Midnight in San Juan.'" When the song ended, he then introduced the band, but not before telling what he called "a story of a moment of terror." Klugh motioned toward his bassist (Al Turner) and explained that "Al lost his wedding ring this morning. Don't worry. It was found. He had left it in a taxi." Turner sheepishly chimed in stating, "I was putting on lotion. Now, I feel naked without it." Klugh continued his portion of the story by adding, "Thankfully we averted a disaster and Al will get his ring back when we get back to the hotel." The audience hung onto every word, smiling as the story unfolded and finally clapping while Klugh patted Turner on the shoulder.

Without missing a beat the band, led by a spoken intro (that sounded like something straight out of Disney's The Lion King), from keyboardist David Lee delivered a muscular take on "Across The Sand." The composition, with its African rhythms was incredible due, in no small part, to the superb craftsmanship of the players melding together to create a virtuoso performance.

Klugh has the amazing ability to express a range of emotions and moods through his guitar that express much more than any words could ever convey. This was never more evident than on "Before You Go," which Klugh introduced with a simple and very modest statement, "This came along very early in my career. It's a nice song that enabled me to continue with my career."

Klugh then sat alone (while his band relaxed off to the side) and picked his way through an impressive solo version of "Alfie." Later in the set, Klugh announced that the next offering was one of his "earliest songs. We're going to feature Otis. It's called 'Vonetta'" Ron Otis delivered a highly syncopated drum solo that afforded Klugh as well as the other members of the band an opportunity to sit, rest and admire the drummer's proficiency. The crowd was appreciative too. They applauded numerous times and erupted when the solo ended and the band rejoined Otis for the song's coda.

Another highlight was the intricate "Dr. Macumba" from Finger Paintings (Blue Note Records, 1977) which featured Klugh's finger picking guitar. Also of note was Lee's keyboard solo which featured his deep baritone delivering a funky, yet tasty "Bow wow, wow, wow, yippie yo yippie yay" nonsense vocal that brought the crowd toward the edges of delirium.

When the show came to an end, everyone in attendance knew that the encore would follow in short order (as there was a second set scheduled immediately after at 10 p.m. The encore, the jazz-funk opus "Twinkle" from Crazy For You (Blue Note Records/EMI Distribution, 1981) featured Turner's grooving, in-the-pocket bass.

What a performance! Klugh's subtle velvet-toned guitar was pure, rich and melodic. The bandleader played with his usual aplomb while allowing each member of the ensemble to showcase his own talents. Klugh, along with Tom Braxton's perfectly timed and inserted flute and saxophone phrases/runs, Turner's thumping bass, Otis' highly syncopated drums, and Lee's funky yet graceful keyboards, played so well of off of each other that at certain times it was difficult to distinguish the individual instruments. The synergistic rhythms and melodies put forth by the group were, in essence, a wall of sound that inundated and swept over the whole of the small room.

As the show ended, Klugh announced that he and the band would be heading upstairs to the Blue Note merchandise store where he'd be available to meet with audience members who wanted to say hello and would be happy to sign CDs. The line immediately formed through the center of the club around the thin aisle and up the stairs to where the famed musician awaited his public.