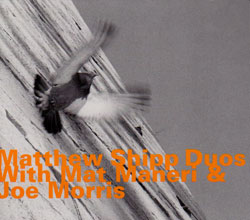 To Matthew Shipp, the piano is a vast kaleidoscopic landscape that will always remain tonally uncharted. Sometimes it is daunting to traverse; at other times it is familiar. When faced with the prospect of the former, Shipp's dynamic and pianistic attack is quite different. He is aroused by the challenge of a pursuit flushed with mysterious tones and colors the sequence of which he seems never to be sure. Then he will attack the notes, repeating motifs with subtly varied approaches so as to tame the emerging, wild progression of phrases, lines and ultimately whole motivic sequences. His fingers might caress notes or, at other times, simply hammer them into playing tones and overtones of his own making. When the keyboard is a familiar, pliant, albeit mysterious stretch of coloration and drama, Shipp is gentle. He caresses the notes and even when he squeezes sound out of several together, he is almost lovingly soft.

Incredible examples of his approach stand out on Matthew Shipp Duos with Mat Maneri & Joe Morris: "Thesis" is characterized by refined savagery of his attack, while Shipp treats his piano like a lover on "Fable" and "Series of Plane"—probably the only title on this showcase record that is built upon a melodic structure. Were it not for Shipp's penchant for abrupt changes in the direction of even his simplest music, this track might even qualify to be a song, although it breaks away from the norm well before musically reaching 32 bars.

The music from this album comes from two distinct sets of duo sessions: Thesis (hatOLOGY, 1997), with guitarist Joe Morris; and Gravitational Systems (hatOLOGY, 1998), featuring violinist Mat Maneri. The titles appear to be as apt as the music would allow. A piano and guitar play similar roles in an ensemble, the rhythmic angularity of both instruments making for similar harmonics, even if the piano adds that rhythmic edge (certainly in Shipp's hands), when it assumes the role of percussive instrumentation. The collision of the two instruments in dialog with one another might suggest a thesis in itself. Whether this is proven depends on the hypothesis. In the case of Shipp and Morris, it is recognizably so, as the two instrumentalists create a fresh stream of music that resides in the distorted elements where Jimi Hendrix might have met Karlheinz Stockhausen via Shipp and Morris.

The duets from Gravitational Systems are less confrontational and because of the natural dramaturgy and allure of glissandi and arpeggios on violin and piano, there is less crystal-like shattering when the pieces proceed. This does not mean that the music is staid and conventional, however. Far from it; the musical terrain created is forceful, dramatic and no less shocking to those who might expect sonic calm. This is a record where the unexpected explodes quite dramatically.